The H.P. Lovecraft Wiki
Register
Don't have an account?
Sign In
Advertisement
in: Articles including information from the Mythos Influenced Works, Mythos-Influenced Works, Sapient Species,
and 2 more

🐙 The Illithids, also known as the Mind Flayers, are an aberrant race from the fictional universe of the Dungeons & Dragons pencil-and-paper roleplaying game.

They were created by Gary Gygax based on a cover of a Brian Lumley's story, claiming it was The Burrowers Beneath,[1] although it more likely was The Caller of the Black instead as the former does not feature any humanoids.

The Illithids (AKA Mind Flayers) are cephalopod humanoids with two arms, two legs, and a bulbous head with a hideous mouth surrounded by fourth tentacles. Illithids are hermaphrodites whom two or three times in their lives spawn larvae. Said larvae resemble tiny illithid heads or tentacled tadpoles. If they survive to reach 10 years of age, they are inserted into a sapient creature's brain. The hosts are usually humanoids ranging in size from 5'4" to 6'2" in height. Once inside the host, it grows and consumes its, absorbs its body, and becomes sapient. There are some who end up taking on elements of their host's former mind. Illithids feed on brains, using the tentacles which rips out the victim's brain.

Their cities are ruled by creatures known as Elder Brains, which reside in the center of their cities, in a pool of cerebral fluid. Upon their death, an Illithid's brain is extracted and taken to the Elder Brain. Illithids believe they will live on in the Elder Brain, their personalities being incorporated. In reality, only it's thoughts, memories, and experiences are incorporated into the Elder Brain. The God-Brains are incredibly ancient Elder Brains, called such due to their nearly limitless psionic powers. Elder Brains serve as vast troves of knowledge which can be telepathically called upon by Illihids, who in turn receive orders from the Elder Brains.

Illithids have formidable psionic powers, that ability being an important part of their identity. Powers include levitation, telekinesis, mind control, and even teleporting themselves to other dimensions via plane shifting. They usually communicate with each other telepathically. Illithids for the most part look upon magic with disapproval, though they do tolerate its study, but only to a limited degree and for the purpose of understanding their enemies. They see other races as being inferior and are forever plotting and scheming against them, seeking power and domination. Due to their psionic powers they are respected by the dominant races within the Underdark (e.g. Beholders and Drow) and are feared on numerous worlds across the multiverse.

They are an ancient race, one whose existence predates recorded history and which even the ancient Aboleths with their perfect racial memory, have no idea of their origins.

Millennia in the past, they were the most powerful race in the Inner Planes. Controlling great empires from the Ethereal and Astral planes, that spanned numerous worlds, commanding a massive spelljammer fleet consisting of countless nautiloids, conch-shaped flying ships. It was an empire of such power that at one point it even threatened the Outer Planes. The spacefaring Illithids operated differently from their land-bound cousins, operating more as traders than conquerors. Unfortunately, there was an uprising by the Gith, their most important slave race. Eventually, it overthrew the Illithids and destroyed their interstellar empire, driving the Illithids to near-extinction. They are now forced to operate underground, hidden from the Gith who continue to hunt them down. 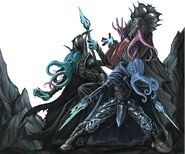 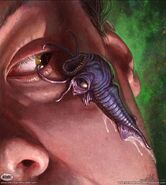