Illyana Rasputina (aka, Magik) is a superhero in the fictional Marvel universe, who was created in 1975, a B-list hero with a few comic book series.

Illyana Rasputina (aka, Magik) is a mutant who also possesses magical abilities. She is the younger sister of Colossus of the X-Men. In her pre-teen years she was kidnapped by the sorcerer Belasco and turned into a demonic sorceress, who overthrew him and took control of his demonic pocket dimension, Limbo.

Ever since she has been its on and off ruler, periodically losing control to Belasco or one of the stronger demons of Limbo, and regaining her throne afterwards. Within the dimension of Limbo she is the Sorceress Supreme. Magik is also a long standing member of the X-Men, having started out as a member of the teenage New Mutants during the 1980s. 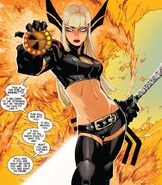 Add a photo to this gallery
Retrieved from "https://lovecraft.fandom.com/wiki/Illyana_Rasputina?oldid=30778"
Community content is available under CC-BY-SA unless otherwise noted.
FandomShop DC Trivia GalaxyQuest