The H.P. Lovecraft Wiki
Register
Don't have an account?
Sign In
Advertisement
in: Articles including information from the Mythos Influenced Works, Mythos-Influenced Works, Dimensions, Locations Originating From Mythos-Inspired Works

The Immaterium is a dimension which is made up purely of psionic energy. This energy supports and echoes the four dimensions of the material universe. It's the source of "magic" and all psionic powers. It's in the Immaterium where the Chaos Gods and the daemons were born and reside.

For most of the spacefaring races, faster-than-light travel is accomplished via the use of Warp-Drives which use the Immaterium as a medium for FTL travel. The Immaterium came into existence because of sentient life in the cosmos, and due to the emotions of those sentients (especially those in the Milky Way galaxy) it has become the material universe's dark reflection. 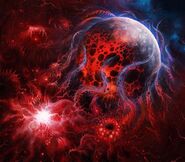 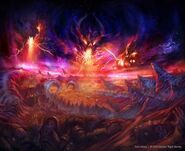 Return of Prospero, a Daemon World
Community content is available under CC-BY-SA unless otherwise noted.
Advertisement