Ishiti is a fictional character from Marvel Comics who was created in 1982 by Gil Kane & Bruce Jones. She made her first appearance in issue #134 of the 1st volume of the Conan the Barbarian comic book series.

Ishiti is an offspring of the Elder God Set. She had the ability to "freeze" time for everything except serpents and any living being which had been bitten and poisoned by a serpent, and anything that person was carrying. In her serpentine form, she had the body of a giant snake with a humanoid head that had fangs and a gorgon-like spread of writhing serpent.

In her semi-humanoid form, she had the upper torso of a woman and was able to extend her two long snake-like arms which would draw a victim into her dimension. Conventional weapons (e.g. swords) were unable to harm Ishiti due to her scaly hide. She could also project powerful mystical blasts from her mouth, which with repeated strikes could turn a human into Serpent Man. The mouth had fangs and was able to swallow a fully grown man. 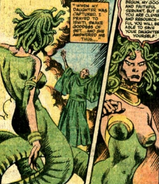 Add a photo to this gallery
Retrieved from "https://lovecraft.fandom.com/wiki/Ishiti?oldid=34043"
Community content is available under CC-BY-SA unless otherwise noted.