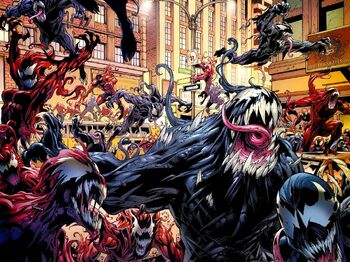 The Klyntar are a parasitic symbiotic extra-galactic race and cosmic horror element in the fictional universe of Marvel by Marvel Comics. They were the primary antagonists of the Spider-Man crossover mini-series, the cosmic horror story, Planet of the Symbiotes.

Eons ago the Elder God Knull created an amorphous race of inorganic symbiotes. Using this army, for over a billion years, he devoured civilizations and conquered worlds, creating an empire of darkness. It was a massive army with an interstellar fleet of living warships, conglomerations of symbiotes which formed winged "dragons". Eventually they learned morality from those they bonded with and rebelled against Knull, imprisoning him. The prison itself consists of billions of Klyntar who have formed an incomprehensibly vast ball, appearing to outsiders as a planet. Desperate to expunge his influence from their race they exiled the corrupted symbiotes. Who went on to continue conquering and consuming worlds, establishing the Symbiote Imperium. They feed on the adrenaline and emotions of their hosts, draining their life force like vampires. They use the technology of conquered races to invade other worlds via starships and/or interstellar portals (stargates / wormholes) and conquer them via the use of their own powers and acquired technologies (e.g. directed energy weapons).

Retrieved from "https://lovecraft.fandom.com/wiki/Klyntar?oldid=30427"
Community content is available under CC-BY-SA unless otherwise noted.