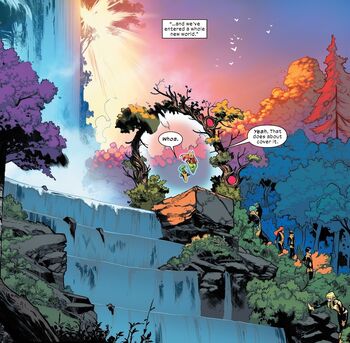 Krakoa is an eldritch location on Earth from the fictional universe of Marvel by Marvel Comics.

Krakoa is a living island, which is semi-sentient. It was mutated by radiation and now is over 1100 sq miles in size. Capable of walking like a man and it's roots have spread throughout the world. It is now the home of a united mutant nation, whose gateways are located worldwide. An eldritch place with eldritch organic machines and systems (e.g. organic computers with numerous eyes), where mutants who die are resurrected in egg-like pods.

Retrieved from "https://lovecraft.fandom.com/wiki/Krakoa?oldid=24641"
Community content is available under CC-BY-SA unless otherwise noted.