The H.P. Lovecraft Wiki
Register
Don't have an account?
Sign In
Advertisement
in: Clean-up, Articles including information from the Expanded Cthulhu Mythos, Sapient Species,
and 2 more
English

The L'gy'hxians are a fictional race created by Chaosium in 1994 for the Call of Cthulhu roleplaying game. They were based on Ramsey Campbell's "The Insects from Shaggai".

The L'gy'hxians are a race of metal cuboids which are three feet tall and are very strong and heavy, which live on L'gy'hx (Uranus). They are not a hostile race and once shared their world with the refugee Shan, until they forced them out due to the loathsome rites they practiced in the name of Azathoth. Nyarlathotep is worshiped by them, mutilating themselves in their rites. 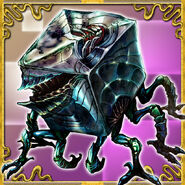