The H.P. Lovecraft Wiki
Register
Don't have an account?
Sign In
Advertisement
in: Articles including information from the Mythos Influenced Works, Mythos-Influenced Works, Other Supernatural Beings,
and 3 more

🐙 The Leviathan is an eldritch god from the fictional universe of the Hellraiser movies and comics. Although not part of the Mythos, it is similar enough to be used in the RPG setting. (EXP: Malleus Monstrorum)

The Leviathan has existed for numerous millennia, ruling over Hell and the Cenobites. The entity is obsessed with law and order. To it the human realm of flesh is chaotic and wrong, and therefore it uses the Cenobites to wage war against it. The Hell of the Leviathan represents the maze of the mind, which is why it takes the form of a Labyrinth.

Legend says that it is ancient, existing long before the creation of life. Chaotic life spread across the world, until it broke through the walls of Hell, bringing light and life to that realm. Leviathan retaliated and pushed life back, but soon threatened his world again. It decided on a new approach, and reached into the dreams of men. Giving men the desire to dominate and shape the world, to crush and slaughter those whom stood in the way. It whispered to them of machines, weapons, and tolls. Man began to destroy and slaughter, and while the world continued to grow, it was now also dying. The Leviathan then visited man in its dreams again, and influenced them to make their world like his. Covering the land with concrete and erecting monolithic towers that reached the sky.

The Leviathan is the creator of the Cenobites, whom come in many shapes and forms. It is an immortal entity that feeds on the souls of those brought to its realm but were not deemed worthy to be made Cenobites. When its beam of black light hits you, he slips inside, and by the time it passes, he knows more about you than you know about yourself. If your touched by the black light, you feel every sin or wrongdoing you have done throughout your life. His only weakness is the the Lament Configuration which if solved in Hell, temporarily weakens him and causes him to lose some of his power. He reverts into a cube shape, and captured souls flee the Leviathan.

The Cenobites are humans who have been brainwashed and mutilated to serve Leviathan. In the Labyrinth they torture humans for all eternity. They are summoned to Earth when someone solves one of Lemarchand's Boxes, the most infamous being the Lament Configuration. Puzzle boxes which promise pleasures. If the individual is deemed worthy by Leviathan, he or she is taken to the Cenobite Transformation Chamber. Where they undergo an alteration that is unimaginably painful, results in a brutally mutilated body with its blood replaced by blue fluid. The end result is twisted version of what you were, without memory of your past life, and often with perverted aspects of your original persona. They cannot be harmed by any conventional weapon or attack. Cenobites can only be harmed or killed by other Cenobites, high tier deities, and supernatural creatures. Among the best known Cenobites are;

The Lament Configuration is a puzzle box which has the power to open the gates of hell. It summons Cenobites to claim the flesh of the one who opened the box, whether by their own hand or by another's hands. When the Cenobites arrive, they determine if the victim is worthy to be made a Cenobite. If so they send him or her to hell to be altered, if not the victim becomes a trapped resident of Hell to be tortured for eternity or is annihilated. A few have escaped such fates by committing suicide before they're taken, figure out the Lament Configuration, make a deal with a Cenobite, or form Leviathan's diamond shape with the Lament Configuration.

Gallery of the Cenobites 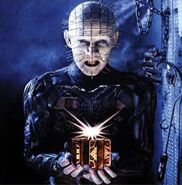 Gallery of the Miscellaneous 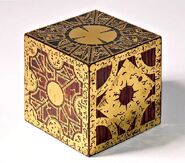