HPL: The Dream-Quest of Unknown Kadath

EXP: The Clock of Dreams

The Men of Leng are an intelligent species of humanoid which first appeared in H. P. Lovecraft's The Dream-Quest of Unknown Kadath, and later featured prominently in Brian Lumley's 1978 Titus Crow novel The Clock of Dreams.

The Men of Leng take their name from the Plateau of Leng, a geographical feature which may or may not be located in the Dreamlands, from which they possibly originate.

Humanoid creatures with hooves and excessive body hair, the Men of Leng are degenerate creatures with little in the way of moral limitations and a penchant for the consumption of human flesh.

When the creatures known as Moon-beasts arrived in the Dreamlands, the Men of Leng initially welcomed them as gods, but the creatures soon turned on the Men of Leng, conquering and enslaving their worshippers. For the most part, they were employed to perform menial tasks, but the Moon Beasts would also take those with the most meat on their bones as a source of food.

Perhaps the most well-known of the Men of Leng are those employed as merchants; these individuals were commonly seen in the Dreamlands port of Dylath-Leen selling the rubies produced by the moon-mines and using the profits to buy more slaves which were sent back to the moon to continue the cycle.

In Brian Lumley's novel The Clock of Dreams, the Men of Leng are shown to be in the service of the Fly-the-Light, and the rubies which they were trading were in actuality a way to entrance the population of Dylath-Leen and bring them over to its cause. Luckily for the townsfolk Titus Crow, Henri-Laurent de Marigny and Tiania were able to thwart the scheme and destroy the crystals, killing many of the Men of Leng in the process.

Men of Leng (Call of Cthulhu) 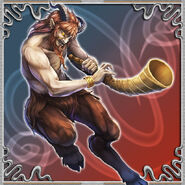