Mappo no Ryûjin is a Great Old One created by Chaosium for the Call of Cthulhu RPG in 2005.

Mappo no Ryûjin is a Great Old One which is currently bound and slumbering in an eight-pointed Elder Sign in the Muvian ruins near the Japanese isles. Currently it is active in a semi-corporeal form. The last time it visited Earth was 50,000 years ago, when Yig unleashed it to punish the Serpent Men who were worshiping Ghatanothoa and who had joined forces with the island civilization of Mu to create a new hybrid race of humans and Serpent Men. In one night, most of Mu and parts of Lemuria sank beneath the waves. The last act of the dying Muvian wizards bound Mappo no Ryûjin to the Elder Sign.

It is believed that at the twilight of the age of man, when the celestial bodies are in perfect alignment, it will bring forth an orgy of destruction, as the sixth race emerges to take over the world. The Mother of Yig will devour the sun and darkness will reign for 666 days. It is a 1000 ft. long entity with two skeletal wings, a desiccated oriental dragon head, and 666 pseudopods covering its white skin. Each of the pseudopods looks like a giant albino snake, which are used to swallow and consume living creatures, each thick enough to contain a human victim. They are covered with a slimy mucous containing digestive acids. 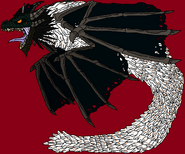 Ryuga Boumera's interpretation of Mappo no Ryujin.
Add a photo to this gallery
Retrieved from "https://lovecraft.fandom.com/wiki/Mappo_No_Ryujin?oldid=37503"
Community content is available under CC-BY-SA unless otherwise noted.