The H.P. Lovecraft Wiki
Register
Don't have an account?
Sign In
Advertisement
in: Articles including information from the Mythos Influenced Works, Mythos-Influenced Works, Extra-Dimensional Characters,
and 2 more 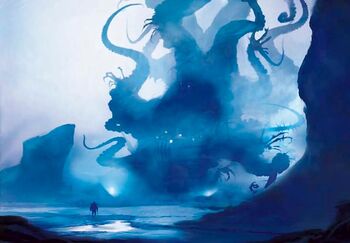 🐙 The Marit Lage is a Lovecraftian-like god from the fictional universe of the Magic: The Gathering collectible card game.

Marit Lage, is an immensely powerful being, which is able to move across the planes of the multiverse. Who has been associated with black mana and said to have been both a mage and a sorceress. Not much is known about the entity, including its origins or history, what it is, and its current status. Centuries before Dominaria's ice age, it devastated the world. During the world's ice age, it somehow ended up frozen in the core of a glacier. No one knows what happened to her or if she is even still alive. Long after her disappearance, she continued to have human followers whom believe she is slumbering within the ocean and are awaiting her return (the Brine Shamans and the Acolytes of Marit-Lage).