The H.P. Lovecraft Wiki
Register
Don't have an account?
Sign In
in: Articles including information from the Expanded Cthulhu Mythos, Species, Extra-terrestrial species,
and 3 more

The War of the Worlds

H.G. Wells
The Martians are a fictional race which first appeared in the Call of Cthulhu RPG in 1995, whom are based on H.G. Wells' The War of the Worlds.

The Martians are a warlike vampiric race that communicates telepathically. Possessing a large eardrum in the back of the head, they are only able to hear specific tones and sounds. They use long glass pipettes to extract blood from their victims, which they take directly into their systems. Extremely strong beings whom are able to move unaided in Earth's heavier gravity, possessing tentacles from which humans rarely escape once they've been caught.

They operate tripod battle machines that cannot be harmed by nothing short of a direct artillery strike. Devastating weapons of war that are 100 ft and can reach 60 mph. Which are armed with heat rays, black smoke projectors, and mechanical tentacles. The invisible heat rays ignite buildings up to a mile away. Canisters release the poisonous black smoke which is rises up to 50 ft into the air, a viscous, clinging thick smoke. The mechanical tentacles are used to grasp objects, when not carrying the black smoke canister guns or heat ray projectors.

Gallery of the Martians 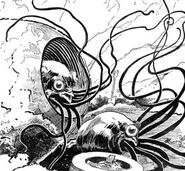 Gallery of the Tripods 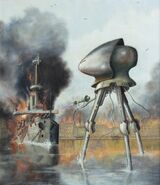 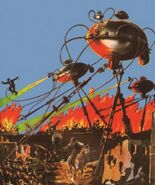