The Fungi from Yuggoth, the Outside Things, the Outer Ones

The Mi-go are an extraterrestrial species from the planet Yuggoth (implied to be the dwarf planet Pluto). They are described as winged creatures with large claws and heads covered in antennae.

The Mi-go are a scientifically and technologically advanced race, having a particularly sophisticated grasp of surgical techniques and neuroscience.

The Mi-go are pinkish, fungoid, crustacean-like entities with a "convoluted ellipsoid" composed of pyramided, fleshy rings and covered in antennae where a head would normally be. They are about 5-feet (1.5m) long, and their crustacean-like bodies bear numerous sets of paired appendages. They also possess a pair of membranous bat-like wings which are used to fly through the "ether" of outer space (a pre-Einsteinian concept). The wings do not function well on Earth. Several other races in Lovecraft's Mythos have wings like these as well, suggesting they are a standard mode of interplanetary travel.

The Mi-go are fundamentally alien with respect to Earthly life; according to two reports in the original short story, their bodies consist of a form of matter that does not occur naturally on Earth. Strangely, they do not appear in photography, since the matter they are made off reflects light differently. However, they are described as being most like fungi in terms of their biology, although their outward appearance is much like that of a crustacean. Interestingly, they are capable of going into suspended animation until softened and reheated by the sun or some other source of heat.

They typically communicate by changing the color of their heads, however they are oftentimes able to speak the human language. If not, they can modify their bodies to make them able to speak. However there will always be a buzzy sound when they speak and their voice sounds creepy.

The Mi-go can transport humans from Earth to Yuggoth (and beyond) and back again by removing the subject's brain and placing it into a "brain cylinder", which can be attached to external devices to allow it to see, hear, and speak.

One of the moons of Yuggoth holds designs that are sacred to the Mi-go. The symbols inscribed upon the moon are useful in various processes mentioned in the Necronomicon. It is said that transcriptions of these designs can be sensed by the Mi-go, and those possessing them shall be hunted down by the few remaining on Earth.

In the Expanded Mythos[edit | edit source]

The Mi-go previously worshipped the beings Yog-Sothoth, Nyarlathotep, Sedmelluq and Shub-Niggurath, among others, although in newer works it is acknowledged that the Mi-go are at war with the Elder Gods. Their moral system is completely alien, making them seem highly malicious from a human perspective.

According to some accounts, Hastur apparently despises the Mi-go. His cult, servants of "Him Who Is Not to be Named", are dedicated to hunting them down and exterminating the fungoid threat.

According to other accounts, the Mi-go serve and worship Hastur specifically, similar to the Deep Ones worshipping Dagon, and have an alliance with the Byakhee, who also serve Hastur. They have a leader who directs them according to Hastur's wishes, named N'gah-Kthun. (EXP: The Necronomicon: The Dee Translation) and a human ally of the Mi-go mentions "Him Who is not to be Named" in the list of honored entities along with Nyarlathotep and Shub-Niggurath. (HPL: The Whisperer in Darkness)

Mi-Go, as it appears in Russell's Guide (merzo.net) 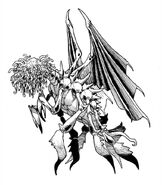 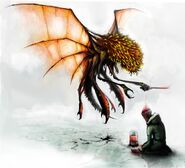 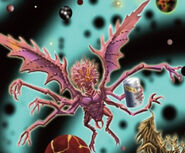 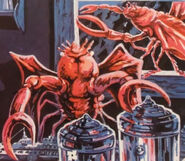 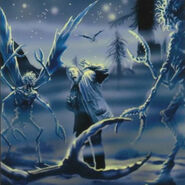 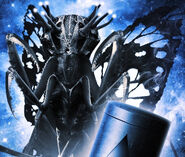 Ryuga Boumera's interpretation of a Mi-Go.
Add a photo to this gallery
Retrieved from "https://lovecraft.fandom.com/wiki/Mi-go?oldid=35290"
Community content is available under CC-BY-SA unless otherwise noted.