The H.P. Lovecraft Wiki
Register
Don't have an account?
Sign In
Advertisement
in: Articles including information from the "Lovecraft Circle" Myth Cycles, Species Originating From Lovecraft Circle Works, Sapient Species,
and 2 more

The Moon of the Dreamlands

The Moon-beasts were toadlike creatures living in the Dreamlands' version of Earth's moon, active in the trade of human slaves and gold (in exchange for their rubies) in the port of Dylath-Leen, on Earth's Dreamlands.

They were created by Howard Phillips Lovecraft in "The Dream-Quest of Unknown Kadath" (Begun probably in the autumn of 1926, completed on January 22, 1927, posthumously published in 1943 by Arkham House).

The Dreamlands version of Earth's moon is populated by a race of strange beings, known only as "moon-beasts."

They are pale, squat, toadlike creatures, superhumanly strong and noxious-smelling, having no eyes but instead a mass of pink tentacles at the end of their snout. They are described as sailing Black Galleys between the Moon and the Dreamlands to trade rubies in exchange for slaves and gold in the port of Dylath-Leen, employing Men of Leng disguised in turbans, as to not reveal their true nature. They communicate using flutes, at least to their servants, being otherwise silent even in death. (HPL: "The Dream-Quest of Unknown Kadath")

While Marvel Comics mentioned or depicted elements from the Dream Cycle, the moon-beasts were never explicitly depicted, though unnamed creatures resembling them were depicted once as a cameo, in Nightmare's Dream Dimension in Moon-Girl and Devil Dinosaur #41 (March 27, 2019), and may have been a reference to them. 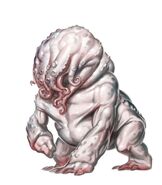 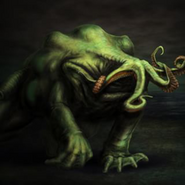 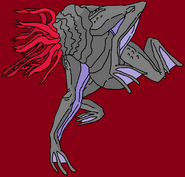 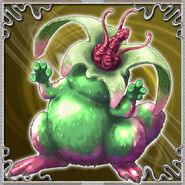