The H.P. Lovecraft Wiki
Register
Don't have an account?
Sign In
Advertisement
in: Articles including information from the "Lovecraft Circle" Myth Cycles, Article stubs, Characters Originating From Lovecraft Circle Works, Other Supernatural Beings

HPL: "The Shadow Over Innsmouth"

🔀 This is an article about the character mentioned in The Shadow Over Innsmouth. For the entity created by Henry Kuttner, see Hydra (Henry Kuttner entity).

Mother Hydra is a creature who, alongside her consort Father Dagon, is said to rule over the race known as the Deep Ones.

There is debate as to whether or not they are a lesser Great Old Ones or mere grotesquely mutated Deep Ones - though the latter seems more likely as they do not seem to show much in the way of supernatural power outside of their gigantic size and unnaturally long life span. Therefore although considered deity, they are not classified as a Great Old One. 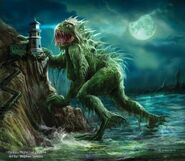 Mother Hydra (Call of Cthulhu, Dark Corners of the Earth)
This article is a stub. You can help the The H.P. Lovecraft Wiki by expanding it.
Community content is available under CC-BY-SA unless otherwise noted.
Advertisement