In the Cthulhu Mythos, there are not only abominable creatures from outer space and beyond our universe. There are individuals, human and otherwise, that have been changed by their encounters with alien technology, exotic energy and other still more strange influences.

Mutants fall under the specifications of having mundane earthly origins, but have undergone some sort of biological change from its mundane counterparts by accidental or incidental interaction with the previously mentioned sources. They should be differentiated from hybrids and other inter-species breeding or biological experimentation by Mythos agents.

Fallout of the Colour Out of SpaceEdit

The Colour Out of Space, after falling within a meteorite to the vicinity of Arkham, Massachusetts, wreaked terrible havok as its exotic energies caused untold biological damage to the surrounding area.

The Grotesque Woodchucks of Meadow HillEdit 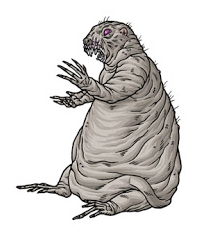 Retrieved from "https://lovecraft.fandom.com/wiki/Mutant?oldid=28356"
Community content is available under CC-BY-SA unless otherwise noted.