The H.P. Lovecraft Wiki
Register
Don't have an account?
Sign In
Advertisement
in: Articles including information from the "Lovecraft Circle" Myth Cycles, Characters Originating From Lovecraft Circle Works, Avatars of Nyarlathotep
English

"The Haunter of the Dark"
"Fane of the Black Pharaoh"

Nephren-Ka, "The Black Pharaoh" (also called Nophru-Ka) is one of the primary avatars of Nyarlathotep on Earth, although in the past it was an independent entity. Nyarlathotep often uses this "mask" for missions that require diplomacy or to recruit acolytes.

Nyarlathotep is worshiped in this avatar by the Brotherhood of the Black Pharaoh.

Nephren-Ka was supposedly the last pharaoh of the Third Dynasty of Egypt. He was the one who introduced the cult of the animal-headed gods to that nation and always stood out as a sorcerer. Nyarlathotep was not long in taking an interest in him and, summoning him to the city of Irem, proposed a bloody pact: Nephren-Ka would sacrifice thousands of victims in his honor and Nyarlathotep would give him the gift of prophecy. This was done and Nyarlathotep granted him the power to see the future. He secured the Shining Trapezohedron for Egypt, but after being convinced by the resident Haunter of the Dark, he had a lightless temple created to hold the stone and the deity within. That temple became a center of abominable happenings, and the rites carried out there were so monstrous the temple was destroyed.

According to legend, when Nephren-Ka felt that his life was coming to an end, he took refuge in his own crypt and there he spent what little time he had left writing down on its walls everything that the future of the world held. It is said that the Black Pharaoh was buried in the Bent Pyramid of Dhasur, but the truth is that no remains have been found at the site. It seems that this is because, when he passed away, Nephren-Ka merged with Nyarlathotep and became one of his avatars. It is also said that, years later, Queen Nitocris had a son whom she named Nephren-Ka. According to some rumors, this could be the reincarnation of the Black Pharaoh and would therefore be Nyarlathotep himself in a new human avatar.

Long after his death, Nephren-Ka once appeared to Pharaoh Akhenaten to propose that he resume the cult of Nyarlathotep, but Akhenaten refused and, in addition to this, had Nephren-Ka's name struck out from all records and monuments to let no one remember the atrocities he had committed. For this, Nyarlathotep cursed Akhenaten, causing the collapse of his empire.

Creation and use in the Cthulhu Mythos

Nephren-Ka was first created by Howard Phillips Lovecraft in The Outsider (written in March-August, 1921, and published in April, 1926).

According to Lin Carter, his mention in The Haunter of the Dark (written in November 1935, and published in the December 1936 edition of Weird Tales) is a reference from Lovecraft to one of Robert Bloch's best story Fane of the Black Pharaoph (published only in 1938, but whose manuscript had been read by Howard Phillips Lovecraft).(EXP: Lovecraft: a look behind the Cthulhu Mythos) 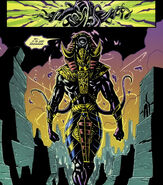 Nyarlathotep as the Black Pharaoh in the "Fall of Cthulhu" comic. 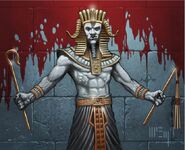 Nyarlathotep as the Black Pharaoh in Pathfinder