The Nestene Consciousness is a Great Old One created by the BBC in 1970 for Doctor Who.

The Nestene Consciousness is a hive mind race which is both a singular entity and a disembodied life force. It is the offspring of Shub-Niggurath, which spawned it on the planet Polymos. (EXP: Millennial Rites, Craig Hinton)

Nestene exist as energy that can possess plastic. Described by the Doctor as "ruthlessly aggressive and intelligent". The Nestene Consciousness manifests either as a being of pure energy and force or as a mass of solid plastic. It's natural appearance is that of a many-tangled horror which is sort of a hybrid of a octopus, crab, and spider. Which is large enough to dwarf a radio telescope. Due to the stresses of the Last Great Time War, their biology have drastically changed, resulting in a form that is mostly plastic and manifests in a mostly liquid form possessing a humanoid face.

The Nestene Consciousness is able to exist in various places, various plaes, and various times. They travel across space in energy units, which are hollow plastic meteorites that are 8.5 inches in diameter and move across space in "clusters" which are swarm formations. Landing on worlds where they are collected by Autons and then placed into an environment tank where a plastic body to contain the brain is manufactured. Nestenes can absorb psychic energy from willing humans and covert their bodies into energy. A Nestene which had been absorbed into a human mind demonstrated the ability to project energy barriers, teleport, and materializing Autons.

The Autons are robots that resemble plastic mannequins, each of which contains a fragment of the Nestene Consciousness. Their hands conceal wrist-guns which can kill or vaporize targets, and can temporarily disable a weakened Dalek. Some of the Autons can alter the shape of their limbs and features. Autons are extremely effective trackers, finding their targets via their brain-wave patterns. 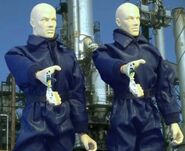