The H.P. Lovecraft Wiki
Register
Don't have an account?
Sign In
Advertisement
in: Clean-up, Articles including information from the Expanded Cthulhu Mythos, Article stubs,
and 2 more

The Ultimate Abomination
The Mad God of the Void
Mlandoth (possible)

Ngyr-Korath (The Ultimate Abomination, The Dream-Death and The Mad God of the Void) is a being which existed before the planets, haunting the star-spaces. It appears as a dark blue-green mist which causes a sense of terror as it approaches. Once close, an eye of flame forms within. When life arrived it became enraged and started to devour stars. A cult to Ngyr-Khorath exists. Its legend (part of the so-called Mlandoth Myth Cycle) appears in the Book of Thoth, The Chronicles of Thrang, the Uralte Schrecken, and The Texts of Mloeng. Von Könnenberg suggests that it is a form of the entity  Mlandoth, and itself has an avatar, 'Ymnar.

He spawned by fission the Great Old One (or the avatar of his) 'Ymnar, and his nemesis is the Elder God Paighon. He may coincide with the entity known as the Magnum Tenebrosum (EXP: "The Barrett Horror", Walter C. DeBill Jr.). 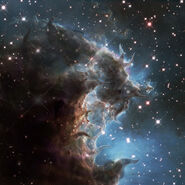