The H.P. Lovecraft Wiki
Register
Don't have an account?
Sign In
Advertisement
in: Articles including information from the "Lovecraft Circle" Myth Cycles, Great Old Ones, Characters Originating From Lovecraft Circle Works

Nug and Yeb are sons of Shub-Niggurath. (HPL: "Out of the Aeons") They are twins born from her mating with her husband Yog-Sothoth. (HPL: Selected Letters 5.875) They were "spawned on the Doomed nebula of Zlykarior." (Necro. II, ch.2, par.1)

According to another account by Eibon, the androgynous Cxaxukluth split in two, becoming male Nug and female Yeb. This minority interpretation may just be a textual gloss attempting to harmonize conflicting information. (EXP: "The Second Epistle of Eibon unto his Disciples, or The Apocalypse of Eibon" [Robert M. Price and Laurence J. Cornford])

Nug is the parent of Cthulhu and Yeb is the parent of Tsathoggua (HPL: Selected Letters 4.617) via the influence of Yog-Sothoth. Nug might be known by the name Ptmâk in Hyperborea, as Ptmâk corresponds to the "immediate" parent of Cthulhu. (CIRCLE: letter of Clark Ashton Smith to R.H. Barlow, September 10th, 1935) Dr. Dee calls Nug "Father of Ghouls," a title shared with its spawn Shaurash-Ho. Nug might also be the father of Hastur.

They are 10 feet in diameter in their usual appearance (HPL: Selected Letters 5.875) Both Nug and Yeb closely resemble Shub-Niggurath.

Nug and Yeb are worshipped in K'n-yan (HPL: "The Mound"), Irem (HPL: "The Last Test") and other places and form a kind of yin and yang symbolically. Other texts refer to the two great old ones as the creator and keeper of the garden where Yig lives. They are entrusted with clearing the earth for the Great Ones return. Using two devices called the "Furnace of Yeb" and the "Torch of Nug" to accomplish this purpose. Esoteric doctrines of monks in Leng teach that Nug and Yeb are the secret names of Lloigor and Zhar, (EXP: The Encyclopedia Cthulhiana) but they never lived on Earth. (HPL: Selected Letters 4.617) Although they might have appeared at or near Kadath, and Nug and Yeb are said to be in the Cavern of Prototypes beneath Mount Voormithadreth (which may be extra-dimensional). Nug is a god among ghouls, while Yeb is the leader of Abhoth's Unclean Ones alien cult. (EXP: "The Descent into the Abyss" Clark Ashton Smith and Lin Carter)

Yeb (Yeb of the Whispering Mists) may also have been called Cxaxukluth in Hyperborea since Yeb is the "father" of Tsathoggua. (HPL: family tree of Azathoth) By implication it is male though it may be androgynous. Yeb is connected with the "Black Flame," and the instrument of world destruction, "The Furnace of Yeb" in which the flame resides on Earth.

Yeb as depicted in Fantasy Flight Games' Call of Cthulhu: The Card Game 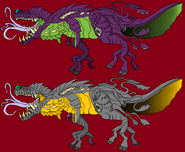