Mike Mignola
The Ogdru Jahad are Lovecraftian reptilian entities in the fictional universe of Hellboy by Dark Horse Comics.

The Ogdru Jahad (aka, the Dragons of Revelation) are chaotic entities whose goal is subjugation and destruction. Beings whose appearance can induce madness. They were born on the newly created Earth, created out of mud and fire by great spirits. Whom were the Watchers, sent by God to oversee his new creation. Despite the efforts of the Watchers, the Ogdru Jahad did not awaken, appearing a failure. During the night the Ogdru Jahad awakened and began to breed abominations, the Ogdru Hem, the first lifeforms on Earth. A total of 369 were spawned before the outaged Watchers waged war against them. Most of the Ogdru Hem were slain and the Ogdru Jahad were imprisoned in a crystal prison in the heart of the cosmos. God looked toward the Earth and in fury punished the Watchers for ruining his creation. Those Odgru Hem which were slain, continued to exist as spirits which would attempt to free their imprisoned Ogdru Hem siblings.

Ever since the Ogdru Jahad have been attempting to break free from their imprisonment and return to Earth. In the early 21st century, one of them (Nunn-Jahad) finally did so, and returned to an apocalyptic Earth. Where it immediately destroyed part of the state of Kansas upon landing and began to breed hordes of Ogdru Hem. Despite the efforts of the U.S. military (barrage of nuclear missiles) and the Bureau for Paranormal Research & Defense (B.P.R.D), they were unable to stop his advance. Worldwide other Ogdru Hem were appearing, devastating cities alongside the Frog people and Hammerhead monsters which served them. He was finally stopped by Johann Kraus who sacrificed himself, channeling the infinite power of Vril to kill Nunn-Jahad. After which all the Ogdru Hem on Earth went still and silent. Though it did not save the Earth, as Hellboy soon afterwards fulfilled his prophecy, bringing about the end of the world (with the help of his lover Elizabeth Sherman who burned the world to a crisp). What remained of humanity survived within Hollow Earth, leaving the surface world to a new race created by Hellboy and the goddess Hecate, a race of amphibious humanoids (similar to Abe Sapien) with Elizabeth Sherman encased protectively in a crystal.

During this apocalypse, the demonic champion of Earth, Hellboy and the B.P.R.D. battled numerous Ogdru Hem, Frog Monsters, and Hammerhead-monsters. Among the Ogdru Hem they faced was the skyscraper-tall bipedal Katha-Hem that was invulnerable to conventional weapons and which emitted green grass that turned humans into frog people. Another one, Sadu-Hem was a tentacled monstrosity which converted a complete town into frog people. The Conqueror Worm was one which also turned humans into frog people with its gas and continued to grow in size, threatening the entire planet.

Difference between Comics and Movies[]

In the Hellboy universe within Dark Horse Comics, the Ogdru Jahad are colossal dinosaur-like monsters. In other words they are dragons, which spawn abominations with a Lovecraftian appearance (tentacles, multiple eyes, etc) and the only one that appears in the present, Nunn-Jahad, can fire energy blasts from its maw.

The Ogdru Jahad of Guillermo del Toro's 2004 Hellboy movie look nothing like the ones in the comics. They are Lovecraftian not only in their background story but also in their appearance. Giant cephalopod-like monsters with gigantic tentacles that can reach toward the planet's surface from high in the sky (clouds) and multiple arms in the upper torso.

Members of the Ogdru Jahad[]

Description of the Ogdru Jahad[]

Gallery of the Ogdru Jahad[] 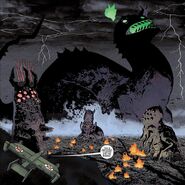 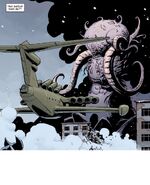 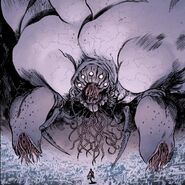 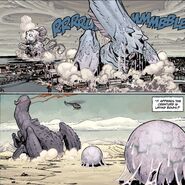 Gallery of the Servitor Races[] 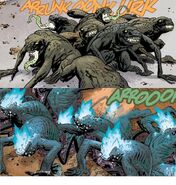 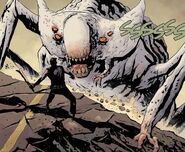