🐙 The Old Ones are Lovecraftian Eldritch titans in the fictional universe of Palladium's Rifts Megaverse, a pen-and-paper game. Beings who are the personifications of chaos and evil.

The origins of the Old Ones are unknown and no one knows how long they have existed. What is known is that for millions of years they ruled numerous worlds and dimensions. Some believe that they created magic, and if not, that at the very least they contributed to its evolution. It is also believed that the Old Ones created many lifeforms, including elves and dragons. The reign of the Old Ones was one of despair and sorrow, having established psychic empires in which lesser lifeforms were their playthings.

Eventually an alliance rose in opposition against them, consisting of many races. The result of this was an epic war that ultimately doomed most of those races. The greatest and most powerful among the Old Ones (Xy, the Great Old One) was tricked by another Old One and disappeared. This turned the tide for the rebellion which eventually realized its goal of finally putting an end to the horrible suppremacy of the Old Ones, all of whom were forced into a state of sleep, being imprisoned in the bowels of various worlds.

The Old Ones are a race whose members do not have a set form. Rather, each member has a wholly distinct form, all of which are nightmarish in their manifestations, violating the known laws of physics and/or biology. Their bodies are so disturbing that most mortals would go mad upon seeing them. Incomprehensible combinations of ectoplasm, slime, flesh, mouths, eyes, teeth, heads, limbs, and tentacles. If any useful analogy of them might be made, it is that they are a race of psychic vampires, all of whom feed on the emotions of lesser lifeforms. As negative emotions are the strongest and most intense, those are the ones they prefer.

While the Old Ones are not omnipotent, their powers vastly exceed those of most cosmic and mystical races and entities. Old Ones are able to shapeshift, have a lifespan that is conservatively in the millions of years, and can regenerate. They have extensive knowledge of magic, and posses nearly god-like psionic powers. They possess such power that if one of them were to be destroyed, the cosmic energy released by its death would be catastrophic. Therefore the reason they were imprisoned rather than be destroyed upon their defeat. Nonetheless, though the Old Ones slumber, and in that slumber their powers be muted, sentient races and beings continue to be influenced by them. Escaping their imprisonment and conquering the Megaverse is their ultimate goal. 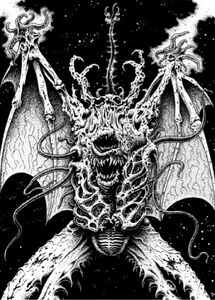 Xy, The Great Old One

Ya-Blik
Add a photo to this gallery
Retrieved from "https://lovecraft.fandom.com/wiki/Old_One_(Palladium)?oldid=32529"
Community content is available under CC-BY-SA unless otherwise noted.