servant of the Jabberwocky

In 1860, two sisters went to the Allen family home to visit their friend William, a boy they had a crush on. Playing a game of hide and seek, the two sisters got into a quarrel and accidentally fell through the Mirror to Wonderland. Frightened by the Jabberwocky, they clung to each other. Their bond of love was so strong that Wonderland was unable to break it, but it was able to twist their love. Physically fusing them into one being, the Queen of Hearts.

The Queen of Hearts bears two equally insane and incredibly emotionally volatile halves (upper and beautiful and lower and ugly), and has a murderous temper. She sentences anyone who offends her, to viciously sadistic deaths. Considering herself the Queen of Wonderland, she answers only to the Jabberwocky. 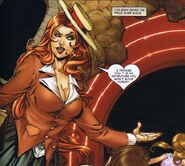 Add a photo to this gallery
Retrieved from "https://lovecraft.fandom.com/wiki/Queen_of_Hearts?oldid=30357"
Community content is available under CC-BY-SA unless otherwise noted.