Terror of the Hominids
He of the Ivory Throne

HPL: "The Horror in the Museum"

Rhan-Tegoth is a fifteen foot tall, medusa-like, insectoid amphibious god-being (Great Old One) of little power but vital to the return of the Old Ones. It lived in the warm seas of Yuggoth before coming to Earth.

3 million years ago, during the Pliocene epoch, it inhabited an area of Alaska before going into a hibernation like trance. Rhan-Tegoth was the last god to sleep, and probably was meant to be the first to wake. Its body was found by George Rogers and moved to a museum in London, 1926 (HPL: "The Horror in the Museum"), but was then lost track of until It turned up, firstly in Sheffield, UK in the 1980s[citation needed]​, and then in Chorazin, New York in the mid-to-late 1980s (EXP: "Wilbur Whateley Waiting").​ It was worshipped by the prehuman, cannibal Gnophkehs, but few humans know of it in modern times (​CIRCLE: "The Scroll of Morloc").

The god is shaped somewhat like an enormous insect, with a tremendous, barrel-shaped trunk with six appendages ending in claws-like pincers and a near-spherical head covered with hair-like filaments or feelers, a tentacle-like proboscis and three small, beady eyes.

Rhan-Tegoth was created by H. P. Lovecraft and Hazel Heald. It was developed by Lin Carter; Laurence J. Cornford and Chaosium. 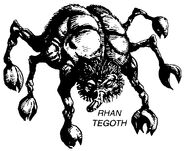 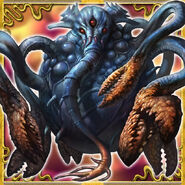