The H.P. Lovecraft Wiki
Register
Don't have an account?
Sign In
Advertisement
in: Articles including information from the "Lovecraft Circle" Myth Cycles, Article stubs, Great Old Ones, Characters Incorporated From Folklore, Myth & Religion

"The Secret of Sebek"

Sebek, The Crocodile God, is a Great Old One usually depicted as a crocodile humanoid with several lower jaws. Although weaker than most Great Old Ones, he has been known to be a warrior deity and is still revered as a powerful god.

Sebek is the creation of Robert Bloch and features in the story "The Secret of Sebek" and is mentioned in others such as "The Fane of the Black Pharaoh".

In these early mythos stories that Robert M. Price calls "The Egyptian tales of Robert Bloch"[1] Egyptian deities such as Bast/Bastet ("The Brood of Bubastis"), Anubis ("The Opener of the Way") and Sebek are treated as Great Old Ones alongside mythos deities, particularly Nyarlathotep.

Sebek's name is an alternate version of the name of the authentic ancient Egyptian god of crocodiles, Sobek. Since the script used to write the name did not use vowels, the name is S-B-K, vowel sounds not known. 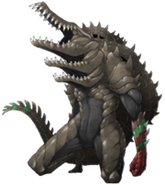 Ryuga Boumera's interpretation of Sebek.
This article is a stub. You can help the The H.P. Lovecraft Wiki by expanding it.
Community content is available under CC-BY-SA unless otherwise noted.
Advertisement