AWD: The Lurker at the Threshold

The Servitors of the Outer Gods, also known as the Idiot Flute-players, are a mysterious species expanded upon by Chaosium for the Call of Cthulhu roleplaying game, which were based on August Derleth's "The Lurker at the Threshold".

The Servitors of the Outer Gods are amorphous beings that resemble squids, frogs, and octopi which are constantly changing their shape and appearance. When needed they accompany the Outer Gods, though most of them are in the Court of Azathoth.

The music to which the Outer Gods dance to is made by these demonic drummers and flautists. On occasion they will also play for cultists to summon deities or to provide background music. 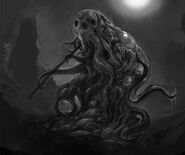 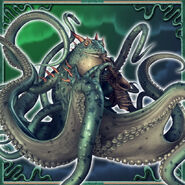 Artwork for Lindwurm's Elder Sign
This article is a stub. You can help the The H.P. Lovecraft Wiki by expanding it.
Community content is available under CC-BY-SA unless otherwise noted.
Advertisement