Set is an Elder God in the fictional universe of Marvel by Marvel Comics. Which also appears as the primary dark / evil god in the Conan mythos, worshiped by most of Conan's greatest sorcerer foes, being the god of the sinister decadent kingdom of Stygia, and the god / creator of the Serpent Men.

The Marvel adaptation of Set first appeared in the 6th issue of the 2nd volume of the Marvel Feature comic book series by Roy Thomas and Frank Thorne.

According to one account, Set is an avatar of Nyarlathotep. (EXP: "The Worm of Urakhu")

Set was one of the Elder Gods of Earth, whose ranks included Gaea, Oshtur, and Chthon. At the dawn of life on Earth, they were created on Earth by Demiurge the sentient biosphere. Set discovered that he could increase his power by devouring other Elder Gods, thereby becoming the first murderer on Earth. Other Elder Gods then followed his example and soon the majority of his kind had become corrupted, as they degenerated into demons. Among the worst of them were Set and his "brother" Chthon. Gaea wept for what happened to her siblings, and to stop the corrupted Elder Gods she conceived a child with the Demiurge. Her son Atum had a secondary form, Demogorge, the God-Eater. He then set out to destroy the corrupted Elder Gods. Some of them managed to escape destruction, fleeing into parallel pocket dimensions, including Set and Chthon.

During the time of dinosaurs, Set formed a bond with the reptiles that ruled the Earth. Using their combined lifeforces, he merged several dinosaur bodies and reincarnated on Earth, making his first manifestation as a serpent. Atum intervened, resulting in an epic battle that lasted eons, a battle so cataclysmic that it resulted in the extinction of the dinosaurs. It was during this battle, that Set first revealed his hydra-like ability to grow two heads for every one that was destroyed. Eventually he was defeated by Atum and forced to retreat back to his dimension. From its pocket dimension it continued to exert varying levels of influence in the physical world via its worshipers and its spawn. It's influence reached 100s of alternate Earths and through its manipulations, on those worlds men create the infamous Serpent Crowns, mystical artifacts that granted men powers but which served as tools for Set to control those individuals.

Millions of years later in the late 20th century, his followers on Earth attempted to summon him to the physical world. The Deviant high priest Ghaur and the Lemurian sorceress Llyra executed a plan which involved mass human sacrifice (the Atlanteans) and several enthralled superhuman women (the Brides of Set) whom were chosen (against their will) to mate with Set and give birth to his spawn. Their plan was stopped by a coalition of superheroes including the Avengers, Fantastic Four, and X-Men. Though Set was summoned to Earth, it was a short-lived return, and he was forced back to his dimension.

Set has spawned a number of demonic-like entities and its bloodline has given rise to monstrous beings and races. Some of his spawn ruled over their own dimensions. Among his most infamous offspring are Phorcys, the Dragon of the Moon, and Yamata no Orochi. Some of the most well known races that descend from Set include the Serpent Men, the Gorgons, and the Sirens.

Gallery of Set the Elder God 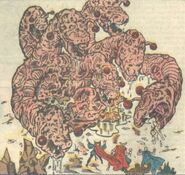 Set vs Atum during the Age of Dinosaurs
Community content is available under CC-BY-SA unless otherwise noted.
Advertisement