Servants of the Elder Things (former)

HPL: "At the Mountains of Madness"

🔀 This is an article about the "shoggoth" species from "At the Mountains of Madness. For the ones from "Notebook Found In a Deserted House," see Dark Young of Shub-Niggurath

Shoggoths are amorphous, shapeshifting beings. They were genetically engineered by the Elder Things as a race of servant-tools, but eventually rose up against their masters and drove them to extinction. Shoggoths are now found in isolated locales across Earth.

A shoggoth is a sentient blob of self-shaping gelatinous flesh, something like a giant amoeba. A shoggoth is some fifteen feet in diameter if it shaped itself into a sphere, but larger and smaller versions exist. A shoggoth is capable of shaping itself into whatever organs or shapes it finds necessary at the moment; however, in its usual state it tends to sport a roiling profusion of eyes, mouths, and pseudopodia. When encountered on the South pole it was able to move at an incredible speed. It was described as watching a train closing in on someone standing on the train tracks.  The shoggoth can kill its enemies by enveloping them and generating enough suction-force to decapicate their victims. That is specifically how they fought the Elder Things during their rebellion. Apparently they emit a horrible, overpowering stench that's strong enough to completely mask the alienating smell of the Elder Things.

A curious behavior of the shoggoth is their repetitive cry of "Tekeli-li! Tekeli-li!"  Demonstrating their mindless mimicry, this is a phrase they copied from the giant blind penguins trapped with them in the Elder Things' city. Arthur Gordon Pym also encountered the phrase, as cries from flocks of large, white birds, in his journey in the Southern Ocean (ADJ: The Narrative of Arthur Gordon Pym of Nantucket [Edgar Allan Poe]).

The shoggoths were originally bred as servitor creatures by the Elder Things, who used them for underwater construction. Their ability to shape their bodies as needed made them ideal living construction machinery. Although created to be mindless, the shoggoths mutated through the aeons and slowly developed consciousness, and even became periodically rebellious. Eventually, they overthrew the Elder Things and killed them, and built their own cities (HPL: "At the Mountains of Madness") Their architecture mimics the five pointed symmetry of the Elder Things.

Though rare, some shoggoths have managed to survive into the modern era, most notably in Antarctica and in the deepest parts of the world's oceans. The race of humanoid amphibious beings known as the Deep Ones are known to ally with or make use of shoggoths, sometimes referred to as "Sea Shoggoths" (EXP: The Burrowers Beneath [ Brian Lumley ]).

The Mi-go also conducted their own Shoggoth experiments, performing "mind-grafts" on the Shoggoths to produce a tamer-breed easy for the Mi-Go to control telepathically. The resultant Mi-Go & Shoggoth hybrids are called 'ghol' or ghol-things.(EXP:"The Perilous Legacy" [ Walter C. DeBill Jr. ])

One notorious shoggoth is Mr. Shiny (Albert Shiny) who takes the form of a human (EXP:At Your Door RPG Module)

In the Marvel Multiverse, the Shoggoths have seemingly a similar origin and early history than those in the Cthulhu Mythos.

At least one Shoggoth remained in the Mountains of Madness during the Hyborian Age. The albino-skinned people that inhabited the lower city of the Old Ones in the Mountains, in the land of Leng used the Shoggoth's cry as word for "death". That Shoggoth was seemingly destroyed by Conan.[1]

Along with "Exo-Parasites" and Viral "Parallels", Shoggoths were also locals of the Exo-Space, the "scavengers of the Outer Omniverse". They were drawn to dimensional tears to try and cross over to other dimensions, to feast on their denizens. It is unknown if those creatures are truly Shoggoths, or if they were named that way, in the same way cosmic horrors were called Cthulhus.[2] 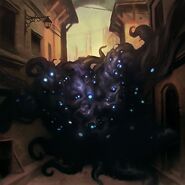 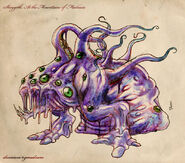 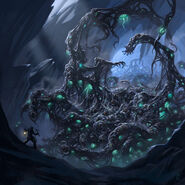 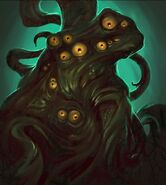 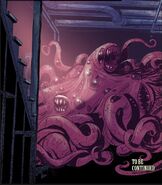 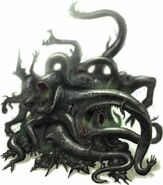 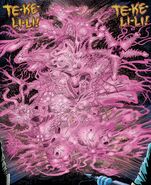 Shoggoth (2016 movie, At the Mountains of Madness)

This article is a stub. You can help the The H.P. Lovecraft Wiki by expanding it.
Español
Community content is available under CC-BY-SA unless otherwise noted.