Shub-Niggurath (The Black Goat of the Woods with a Thousand Young) is an Outer God in the Cthulhu Mythos of H.P. Lovecraft. The being first appeared in Lovecraft's revision story "The Last Test" (1928); however, in Lovecraft's fiction, she is never actually described, but is frequently mentioned or called upon in incantations. Shub-Niggurath also appears in the works of other mythos authors, including August Derleth, Lin Carter, and Brian Lumley.

Shub-Niggurath is an Outer God (or Outer Goddess) in the pantheon. She is a perverse fertility deity, said to appear as an "evil cloud-like entity". (HPL: "Selected Letters 5.875")

An enormous mass which extrudes black tentacles, slime-dripping mouths, and short, writhing goat legs. Small creatures are continually spat forth by the monstrosity, which are either consumed into the miasmatic form or escape to some monstrous life elsewhere.

Of all the mythos deities, Shub-Niggurath is probably the most extensively worshipped. Her worshippers include the Hyperboreans, the Muvians, T'yog of K'naa, and the people of Sarnath, as well as any number of druidic and barbaric cults. She is also worshipped by the non-human species of the mythos, such as the "Fungi from Yuggoth" (the Mi-Go) and the Nug-Soth of Yaddith. (EXP: The Encyclopedia Cthulhiana) With the proper occult paraphernalia, Shub-Niggurath can be summoned to any woodlands at the time of the new moon. However, the place from whence she comes is not known. One possibility is that she dwells at the court of Azathoth at the center of the universe. She may also live beneath the planet Yaddith, where she is served by the Dholes. It is also possible that she lives in another dimension altogether. (EXP: The Encyclopedia Cthulhiana)

Shub-Niggurath is believed to have mated with Hastur to produce the beings Ithaqua, Zhar, and J'Zahar. Hastur may also be the father of her "Thousand Young" or "Dark Young", though there is a good chance that they were spawned by fission. She may possibly have mated with Yog-Sothoth to produce Nug and Yeb (though their father is more likely Hastur), and even Yig to produce Byatis which is debatable since some believe her to be Yig's mother, though he may be the offspring of Mappo no Ryûjin.

The Dark Young of Shub-Niggurath are horrifying, pitch-black monstrosities, seemingly made of ropy tentacles. They stand as tall as a tree (perhaps between twelve and twenty feet tall) on a pair of stumpy, hoofed legs. A mass of tentacles protrudes from their trunks where a head would normally be, and puckered maws, dripping green goo, cover their flanks. The monsters roughly resemble trees in silhouette — the trunks being the short legs and the tops of the trees represented by the ropy, branching bodies. A congregation of these abominations smells like an open grave. They usually dwell in woodlands wherever Shub-Niggurath's cult is active.

The Dark Young are usually called upon to preside over cult ceremonies. One means for summoning them is found in the Book of Eibon and requires a blood offering. The ritual may only be performed in the deep of the woodlands at the darkest of the moon, and the victim must be sacrificed over a stone altar. Dark young act as proxies for Shub-Niggurath in the accepting of sacrifices and the worship of cultists, in the devouring of non-cultists, and in the spreading of their mother's faith across the world.

Her milk has many properties, mutating those who drink it into fierce creatures. (EXP: At Your Door, RPG)

"gof'nn hupadgh Shub-Niggurath" is the name given to the favored, once-human worshipers of Shub-Niggurath. When the deity deems a worshiper to be most worthy, a special ceremony is held in which the Black Goat of the Woods swallows the initiate through her womb and then rebirths the cultist as a transformed satyr-like being. A changed worshiper is also endowed with immortal life. (EXP: "The Moon-Lens", Ramsey Campbell)

The Great God Pan to be an avatar of Shub-Niggurath. (EXP: Malleus Monstrorum, RPG)

The Magna Mater, or the Great Mother, is a goddess worshipped since before Roman times. She is associated with Cybeles and Atys. (HPL: "Rats in the Walls") Among the cults surrounding Lilith under Red Hook, headless lambs worshipped the Magna Mater (HPL: "The Horror at Red Hook") This is an avatar of Shub-Niggurath. (EXP: Delta Green - Countdown, RPG)

The current residence of Shub-Niggurath remains a mystery. A popular hypothesis is the planet Yaddith, beneath the surface of which it resides with its dhole servitors. However, it is postulated in R. L. Tierney's "The Lords of Pain" that the Black Goat of the Woods came to earth, building the city of Harag-Kolath in a cavern beneath southern Arabia, though its possible the cavern and Harag-Kolath exist conterminously with Yaddith or are linked to it. It is also possible that Shub-Niggurath remains at the court of Azathoth, or even in another dimension entirely.

In the writings of August Derleth and Lin Carter, the Tcho-Tcho People, as well as The Little People (sometimes called "fairies" and sometimes identified with The Worms of the Earth), are servants of Shub-Niggurath.

Appearances in other fiction

Both Stephen King and Terry Pratchett have referenced Shub-Niggurath in their works. Terry Pratchett parodies Lovecraftian gods, referring to them as the things from the "Dungeon Dimensions". For example, in Pratchett's Moving Pictures, the being "Tshup Aklathep, Infernal Star Toad with A Million Young" kills its victims by showing them pictures of its children until their brains implode.

Some of the Doctor Who spin-off novels have identified the Nestene Consciousness (the being which animates the Autons) as one of the offspring of Shub-Niggurath. The connection was first drawn in Millennial Rites by Craig Hinton, and has been followed up in other appearances of the Consciousness in the novels.

The light novel and anime series "Overlord" makes a reference to her, as the main character casts a spell that summons Shub-Niggurath's offspring to destroy an enemy army. (He sacrifices 70,000 enemy troops to summon five Dark Young, using them to slaughter an additional 110,000 for a total of 180,000.) However, this ritual is used in plain sight, and not in the woods during a new moon.

The Elder Sister-Like One

Mangaka Pochi Iida features Shub-Niggurath as one of the two main characters in a manga/doujin series named The Elder Sister-Like One (姉なるもの, Ane Naru Mono) and subtitled The Sister of the Woods with a Thousand Young. The first works in the series were several individual pornographic doujin that were self-published by Pochi, with the series being later picked up and turned into a mainstream manga series by Kodakowa Publishing. Pochi has stated that she considers both series to be canon. In the series a young orphan boy by the name of Yuu is staying at the house of his uncle who is currently hospitalized. While cleaning a storeroom, he finds a hidden basement underneath it, and upon opening it he is faced with the figure of a beautiful woman of approximately 20 years who offers to grant him a wish in exchange for something precious to him upon fulfillment of the contract. Yuu wishes for a sister, having gone without family for most of his life. Shub-Niggurath (the human form of the Ancient Elder One) takes on the name Chiyo and begins to live as Yuu's sister. The series mainly focuses on the daily life of Chiyo and Yuu and their struggles with Chiyo attempting to become more human-like while Yuu struggles with adapting to having a family after not having one for so long. The series is overshadowed by the dubious nature of the contract between Yuu and Chiyo in which the exact nature of the payment at the end has not been revealed.

The Blessed of Shub-Niggurath are a race of goat-men who created by Chaosium in 1994 for the Call of Cthulhu RPG, who were based on Ramsey Campbell's The Moon-Lens.

Shub-Niggurath is the final boss character in the 1996 video game by id Software, titled "Quake."  The only way to defeat her is to follow the movement of a spiked sphere moving around the room and sometimes through Shub-Niggurath herself.  You must time the positioning of the spiked sphere right, and leap through a portal to tele-frag Shub-Niggurath, thus killing her.

That Time I Got Reincarnated As A Slime

"Harvest Lord, Shub-Niggurath" is an ultimate skill Rimuru acquires after "Theosophy Core: Ciel" tinkered and combined his other skills. It's powers include: Skill Creation, Skill Duplication, Skill Gifting, Skill Bank. Using it, Rimuru can grant new powers to those he has forged a bond with. 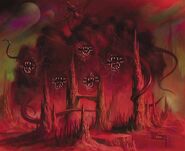 Shub-Niggurath as it appears in Russell's Guide (merzo.net) 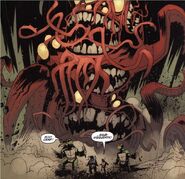 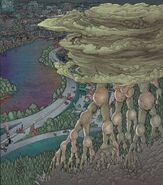 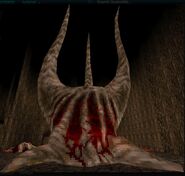 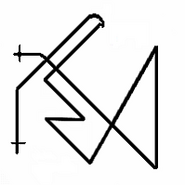 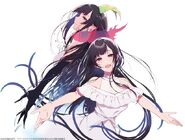 chiyo, from the manga the elder sister like one/ ane naru mono

Shub-Niggurath by Bigeggs
Add a photo to this gallery

Retrieved from "https://lovecraft.fandom.com/wiki/Shub-Niggurath?oldid=34653"
Community content is available under CC-BY-SA unless otherwise noted.