The H.P. Lovecraft Wiki
Register
Don't have an account?
Sign In
Advertisement
in: Articles including information from the Mythos Adjacent Works, Locations Originating From Mythos-Adjacent Works, Regions/Territories

They placed it in the "center tower", and before they went through the portal, Captain Britain was warned that a living man could end up dying of introspection in there. He also mentioned that he risked the fabric of his mind by taking him there. The "center tower" ended up being an Undead Celestial, the god of the planet's inhabitants, who held the Orb of Nercomancy which they planned to use to spread undeath throughout the cosmos. 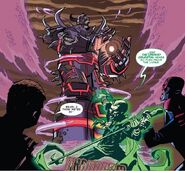