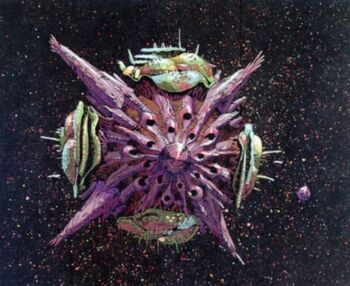 Space Monsters are an eldritch-like spaceborne insectoid race and the cosmic horror element in the fictional universe of the Gunbuster anime.

Space Monsters (aka, Uchuu Kaiju) come in a wide variety of shapes and sizes. The smallest of them, the "Grunts", look like colossal spiders, the size of massive tanks or super-sized fighters. The fleet conists of starship analogs, many of them miles long or city-sized.These analogs are led by Motherships which are the size of moons. The greatest and most powerful of the Space Monsters was as large as a gas giant, approximately 30,000 km long. Space Monsters are able to track enemy ships and fleets traveling within sub-space and the largest Space Monster used a black hole as a power source.

In battle the Space Monsters rely on sheer numbers to overwhelm their enemies. Space Monster fleets are so large that they occupy a space equivalent to that of a gas giant planet. Which will send wave after wave of Space Monsters against the opposition, each wave consisting of billions of insectoids. The ship and worldship analogs have a wide variety of weapons including plasma bio-cannons (the most powerful being able to blast through planets), spine-like armor piercing projectiles that can rip through starship armor, and swarms of 100s of drones.

Reproduction is done by laying eggs within stars, which drain it of energy. Which leave the star upon hatching and reaching maturity. The star is prematurely aged, to such an extent, that within a few years of the Space Monster leaving the star, a yellow G-class star becomes a red giant. The Space Monsters are theorized as being the galaxy's antibodies and perhaps that of the universe. Which exterminates parastic lifeforms, otherwise known as sentient life. Human scientists came up with this theory due to the fact that they have not encountered any other lifeforms in the Milky Way galaxy.

Whenever the Space Monsters and human race have met, it has resulted in battle as the former attempted to exterminate mankind. The first war between the two erupted in 2015 AD, forcing the humans to build ever larger and more powerful warp capable starships to fight the Space Monsters.

The human race ended up developing a planetoid-sized bomb which they detonated at the galaxy's center. The Space Monsters were sucked into the black hole it created and for the next 12,000 years, the human race was the only sentient species in the Milky Way. Resulting in a golden age of human expansion across the galaxy. At the end of that period, the Space Monster threat reemerged, in the form of a solitary planet-sized Space Monster powered by the same black hole that headed toward Earth. A force of titanic robots saved the Earth.

Retrieved from "https://lovecraft.fandom.com/wiki/Space_Monster?oldid=27488"
Community content is available under CC-BY-SA unless otherwise noted.