The Spiders of Leng, or Leng Spiders as they are sometimes known, are sentient cannibalistic creatures which appear in H. P. Lovecraft's fictional Cthulhu Mythos.

Purple-colored arachnid creatures that appear somewhat similar to terrestrial spiders yet on a much larger scale, the smaller of the Spiders of Leng are the size of a Shetland pony; larger specimens would tower over an elephant. They possess a degree of intelligence far higher than that of regular animals, but are not above the cannibalisation of other Leng Spiders. Whilst they are capable of spinning webs to disable their victims, they also possess a venomous bite of great potency, and have the ability to climb sheer surfaces, much like their counterparts in the waking world.

Long ago, the Spiders controlled the entire Plateau of Leng in Earth's Dreamlands, until defeat after a long war with the Men of Leng forced them to abandon much of their homeland and retreat back to the southern mountains and vales of that strange land. There they dwell to this day, ready to prey on any creature foolish or unwary enough to stray into their territory. 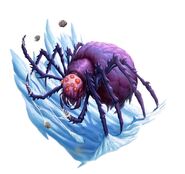 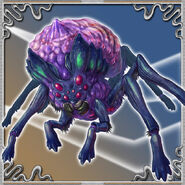