"The Lair of the Star-Spawn"

The Tcho-Tcho people are a group of tribes of near-human Asian natives. They can be found in Burma, The Anderman Isles, Tibet, and Malaysia. They are genetically from humans, but they are notably smaller, have livid red skin, and other marked physiological differences. Legends point to prehistoric genetic engineering of pre-human ancestors by the Great Old Ones Zhar and Lloigor. These legends purport they "grew from the 'seeds' of the Twin Obscenities".

They are feared by other tribes and appear to be inimical to Mankind. They worship the beings of the Cthulhu Mythos (notably, Han, Chaugnar Faugn, Rhan-Tegoth, Hastur, and his spawn). They appear to be the "corpse-eating cult of Leng" mentioned in the Necronomicon and have "lamas" as priests (cf. Elder Hierophant). One source suggests that only the warrior caste are bred small. They might be related to the Men of Leng in the Dreamlands. The name Tcho means "destroyer" or "sorcerer", thus the Tcho-Tcho people are the "destructive sorcerer people."

They are descendants of Miri Nigri, who were created by Chaugnar Faugn from amphibious flesh in early Earth history, and humans.[2]

Though they have yet to appear, the Tcho-Tcho people were stated to exist in the Marvel Universe. At some point between his vampirification (circa 18,500 BC) and 1000 AD, Varnae, Lord and first of the Vampires, stated that the Tcho-Tcho had known him as Tsathoggua (presumably worshiping him).[3] 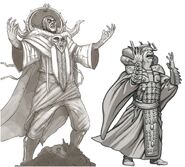 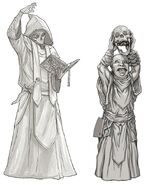