The H.P. Lovecraft Wiki
Register
Don't have an account?
Sign In
Advertisement
in: Articles including information from the Mythos Adjacent Works, Locations Originating From Mythos-Adjacent Works, Structures

The Temple of Chthon is a fictional temple in the Marvel universe which first appeared in 2016 in the #13 issue of the 2nd volume of Carnage.

The Temple of Chthon (aka, the Temple of the Darkhold)[citation needed] is located on the Chthonic Island. It's a massive temple with eldritch statuary and wall sculptures, which has a stairway that goes deep into the Earth. Deep under the temple is a nether region, between the material world and Chthon's reality. Where the rules of Euclidean geometry and Newtonian Physics no longer apply. The psychopathic supervillian Carnage entered the temple where he temporarily brought Chthon to Earth. 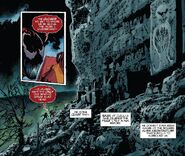