The Haunter of the Dark

The Haunter of the Dark

🔀 For the character, see Haunter of the Dark

"The Haunter of the Dark" is a short story by the late H. P. Lovecraft.

The story takes place in Providence, Rhode Island and revolves around the Church of Starry Wisdom. The cult uses an ancient artifact known as the Shining Trapezohedron to summon a terrible being from the depths of time and space.

The Shining Trapezohedron was discovered in Egyptian ruins, in a box of alien construction, by Professor Enoch Bowen before he returned to Providence in 1844. Members of the Church of Starry Wisdom in Providence would awaken the Haunter of the Dark, an avatar of Nyarlathotep, by gazing into the glowing crystal. Summoned from the black gulfs of chaos, this being could show other worlds, other galaxies, and the secrets of arcane and paradoxical knowledge; but he demanded monstrous sacrifices, hinted at by disfigured skeletons that were later found in the church. The Haunter of the Dark was banished by light and could not cross a lighted area.

The Shining Trapezohedron is a window on all space and time. Described as a "crazily angled stone", it is unlikely to be a true trapezohedron because of the Old Ones' penchant for bizarre non-Euclidean angles. It was created on dark Yuggoth and brought to Earth by the Old Ones, where it was placed in its box aeons before the first human beings appeared. It has further history in Atlantis and with the Pharaohs of Egypt, until it was finally unearthed and brought to New England.

After the death of Robert Blake, who came to grief after discovering the Shining Trapezohedron and deciphering texts about it from ancient evil cults, the artifact was removed from the black windowless temple where it was found by a Dr. Dexter and thrown into the deepest channel of Narragansett Bay. It was expected to remain there, under the eternal light of the stars, forever.

The Shadow from the Steeple

Yet, Robert Bloch's sequel, The Shadow from the Steeple, proved that Nyarlathotep had cheated Dexter, forcing him to peer into the stone and actually throw the stone into the bay, where the eternal darkness of the depths gave the Haunter the power to remain perpetually free; it used this power to merge with Dr. Dexter and make him one of the world's leading nuclear scientists in charge of atomic investigation for warfare. 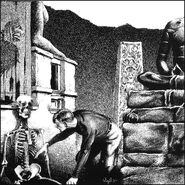