The King in Yellow (Avatar of Hastur)

The King in Yellow

The King in Yellow is one of the avatars of Hastur and is one of the best known forms of the deity. He is a powerful and mysterious being, bearer of madness and damnation, associated with the story of the same name.

Judging from the original stories, the cursed play The King in Yellow is somehow linked to this being in a nebulous and horrible way, a tattered-looking foreign god who bears some connection to an entity or city called Ythill. The King is in turn linked in some way with "Carcosa, where black stars hang in the skies; where the shadows of men's thoughts lengthen in the afternoon, when the twin suns sink into Lake Hali." His nature, the king's motives, and his modus operandi are unclear; but he appears from time to time on Earth, by animation of corpses or possessing those strange "humans" already slaves to him, and claiming (or recovering) those who have eluded him. Reading the play exposes the King and causes readers to fall under his influence, driving them insane.

The King does not strictly appear in the original stories, at least not in a way that allows for a good description. Whilst the narrator seems to see the Yellow Sign briefly before dying, he is not able to convey everything he sees.

References to the King

There are few direct references to the King in Yellow in the book that bears his name by Robert William Chambers. There are implications that he (or she) is a kind of horrible being, perhaps all powerful, powerful and insidiously pervasive, though there is little mention of what substance it is or the origin or the true form it takes; his machinations, however, stem from an unlimited desire for domination. As Mister Wilde has pointed out in "The Repairer of Reputations": "The ambition of Caesar and Napoleon pales in the face of what he could not rest until he had seized the minds of men and controlled even their unborn thoughts... He is a king whom the emperors have served."

The snippets given from the play's script, as mentioned in the stories, suggest that the king is connected to the Pallid Mask, which is possibly a projection or avatar of the king himself or at least his servant or emissary. The king, however, seems to be present both in the "reality" inhabited by the protagonists of Chambers' tales and within the fictional world of the play; Part of the horror of the stories is the way the king's malice flows from one layer of reality to another. For the characters, allowing their minds to open up to the forbidden game and their world is to give the entity the means to reach them.

The king's ability to possess the bodies (not necessarily alive) of those who have fallen into slavery is evidenced by the fate of the narrator, Mr. Scott, in The Yellow Sign: "The door below opened and closed, and shuddering dragged me to my door and bolted, but I knew there are no screws, locks, they could keep that creature out coming for the Yellow Sign. And now I heard him move very smoothly down the hall. Now he was in the door, and the bolts rotted at his touch. Now he had come in. I peeked into the darkness, but when he entered the room I didn't see him. It was only when I felt I was on his soft, cold hands that mine cried out and fought with deadly fury, but my hands were useless... I knew that the King in Yellow had opened his tattered cloak and there was only God to cry now." 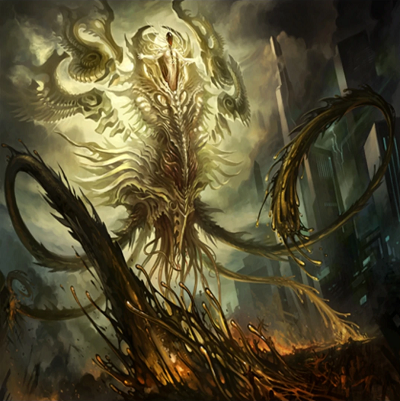