𝓦𝐓 "The Nameless City" is a horror story written by H. P. Lovecraft in January 1921 and first published in the November 1921 issue of the amateur press journal The Wolverine. It is often considered the first Cthulhu Mythos story.[1]

Lovecraft said that the story was based on a dream, which was in turn inspired by the last line of Lord Dunsany's story "The Probable Adventure of the Three Literary Men", quoted in the story itself: "the unreverberate blackness of the abyss". (HPL: Selected Letters I)

Another identified source is the 9th Edition of the Encyclopædia Britannica, whose description of "Irem, the City of Pillars" he copied into his commonplace book: "which yet, after the annihilation of its tenants, remains entire, so Arabs say, invisible to ordinary eyes, but occasionally, and at rare intervals, revealed to some heaven-favoured traveller." (EXP: An H. P. Lovecraft Encyclopedia)​

Critic William Fulwiler argues that Edgar Rice Burroughs' At the Earth's Core was one of Lovecraft's primary inspirations for "The Nameless City", citing "the reptile race, the tunnel to the interior of the earth, and the 'hidden world of eternal day'" as elements common to both tales.[2] More generally, Fulwiler suggests, the theme of "alien races more powerful and more intelligent than man", which recurs frequently in Lovecraft's writings, may derive from Burroughs' Pellucidar stories.[3] However, both writers drew on an already existing and vast literature of "lost city" stories and novels. 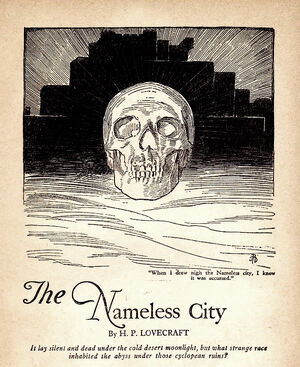 The Nameless City of the story's title is an ancient ruin located somewhere in the deserts of the Arabian Peninsula and is older than any human civilization.

In ancient times, the Nameless City was built and inhabited by an unnamed race of reptiles with a body shaped like a cross between a crocodile and a seal with a strange head common to neither, involving a protruding forehead, horns, lack of a nose and an alligator-like jaw. These beings moved by crawling; thus, the architecture of the city has very low ceilings and some places are too low for a human being to stand upright. Their city was originally coastal, but when the seas receded it was left in the depths of a desert. This resulted in the decline and eventual ruin of the city.

The protagonist of "The Nameless City" states:

Indeed, the reptilians still maintain some form of life in a vast, luminous paradise in a cavern beneath the Nameless City, preserved and placed along the walls in a subterranean chamber. Also within this chamber are hieroglyphs and reliefs that tell to the protagonist the story of the city's heyday of prosperity and its fall, as well as their eventual hatred of humanity.

In "The Nameless City", Alhazred is not yet identified as the author of the famous Necronomicon, but the "unexplained couplet" that Lovecraft attributes to him is later established as coming from that work. (HPL: "The Call of Cthulhu")

"The Nameless City" is an early example of Lovecraft's technique of mixing references from history, literature and his own fiction to create a persuasive background for his horrors.[4] At one point, the narrator recalls:

In this passage, Chaldaea is a historic region in Mesopotamia, whereas Sarnath, Mnar, and Ib are places in Lovecraft's story "The Doom That Came to Sarnath".

Later in the story, a single paragraph mentions Lovecraft's fictional Arab poet, an actual 5th century philosopher, a writer from the Middle Ages, a legendary Persian king, and one of Lovecraft's favorite fantasy authors:

The paragraph goes on to quote the Irish poet Thomas Moore.

The Colossi of Memnon are also mentioned.

Though Lovecraft counted "The Nameless City" among his favorite stories, it was rejected (following its original amateur appearance) by a variety of professional outlets, including Weird Tales (twice), Fantasy Magazine and possibly The Galleon. It was accepted by The Fantasy Fan, which folded before publishing it. It eventually appeared in the Fall 1936 issue of Fanciful Tales, published by Donald A. Wollheim and Wilson Shepherd, and was reprinted in the November 1938 issue of Weird Tales after Lovecraft's death.

Lin Carter describes "The Nameless City" as "a trivial exercise in Poe-esque gothica", calling it "overwritten [and] over-dramatic". "[T]he mood of mounting horror is applied in a very artificial manner", Carter writes. "Rather than creating in the reader a mood of terror, Lovecraft describes a mood of terror: the emotion is applied in the adjectives." He does, however, allow that the tale has some "evocative power":

Lovecraft himself was powerfully moved by an emotion of awe and fascination when contemplating the mysterious ruins of unthinkable antiquity. This emotion he manages to convey in a sort of dreamlike manner, despite his coldly clinical use of adjectives.[5]

Alberto Breccia adapted the story to a graphic novel in 1974.