The Shambler from the Stars

The Shambler from the Stars

𝓦𝐓 "The Shambler from the Stars" is a horror short story by American writer Robert Bloch, first published in the September 1935 issue of Weird Tales. It is the first story of the Robert Blake Cycle.

It was later included as part of his first published book, The Opener of the Way (1945), and his 1994 collection The Early Fears. A Cthulhu Mythos tale, it introduced the forbidden tome De Vermis Mysteriis (Mysteries of the Worm), although it had been earlier mentioned in the short story "The Secret in the Tomb". Later on in 1935, Lovecraft wrote the short story "The Haunter of the Dark" as a sequel and dedicated it to Bloch. Eventually, in 1950, Bloch wrote his own sequel "The Shadow From the Steeple".

Robert Bloch's idea was to write a story in which he could "kill" a character inspired by Howard Phillips Lovecraft, whom he considered his mentor and pen pal. Before drafting it, he sent a letter to Lovecraft himself asking for permission to do so, to which he replied:

Lovecraft, who signed it, had the likes of Abdul Alhazred, Friedrich Wilhelm von Juntz, Gaspar du Nord and the Tcho-Tcho Lama of Leng appear as witnesses to the document. Although Lovecraft liked the story, he decided to continue the joke by killing the narrator of the story, inspired by Robert Bloch, in the sequel.

The story focuses on a college student who hopes to become a writer of weird fiction pulp. As his works are repeatedly rejected, he seeks forbidden knowledge and begins correspondence with thinkers and dreamers. A "mystic dreamer" from New England tells him of tomes such as the Necronomicon and Book of Eibon. Soon afterwards, the narrator mails letters to various libraries, universities, and occult practitioners, hoping to secure the volumes. As he is only met with both hostility and threats of violence, he begins searching various bookstores around his hometown.

At first, he again meets with disappointment, but, in an old shop on South Dearborn Street, he obtains De Vermis Mysteriis, which he knows was written by a Belgian sorcerer named Ludvig Prinn, who was burned at the stake during the witchcraft trials. Finding it to be written entirely in Latin, and not being able to speak the language, he contacts the New England mystic, who agrees to aid him in translation. The narrator travels to his home in Providence, Rhode Island, where the mystic is initially hesitant to even open the volume, but eventually does so upon the narrator's insistence. While perusing the book, the mystic inadvertently stumbles across a spell or invocation which he believes to be a summoning towards one of the invisible "star-sent servants" spoken of in the stories surrounding Prinn.

The narrator doesn't stop the mystic from reading the inscription out loud, and immediately afterwards, the room turns cold. An unearthly wind rushes in through the window, followed by a hideous laughter, which heralds the arrival of an invisible vampiric monstrosity; a star vampire. The monster lifts the mystic into the air, and begins feeding off of his blood leaving a flabby corpse. As the creature continues to feed, it slowly becomes more visible until its form is fully revealed. Upon witnessing the fully visible "shambler from the stars," the narrator goes mad. After the creature retreats back into whence it had come, the book vanishes and the narrator wanders out into the streets, shortly after setting his own friend's house on fire. While the narrator struggles to move on, he subconsciously fears that the shambler from the stars will one day return for him. 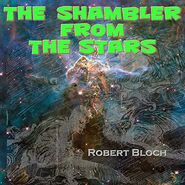