Thog the Ancient is an octopus-like monstrosity of the Hyborian Age which haunts the underground city of Xuthal.

Thog the Ancient is a Great Old One, residing within the subterranean city of Xuthal. It preyed on the city's lotus-dreaming inhabitants whom were slowly being consumed by the hungry entity which roamed its dark corridors. They were also prey to its cosmic lusts, as Conan's companion Natala discovered to her horror. Xuthal's inhabitants whom lived for sensual pleasures, lived in terror of it, and would draw lots to see whom would be thrown to Thog to satisfy it's lust and hunger.

In Marvel, Thog the Ancient was seemingly the same (including his encounter with Conan, though it is unknown if he was one of the Great Old Ones, or a Lesser Old One.

He was possibly related to the demons Thog (a Hell-Lord originated from the energies released by the culling of the Elder Gods by the Demogorge) and Thaug (ally of Salome, possibly a Great Old One). 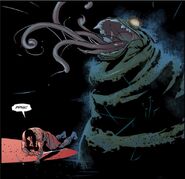 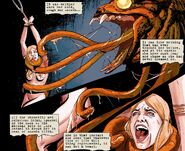 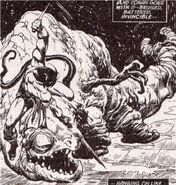 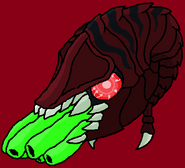