The H.P. Lovecraft Wiki
Register
Don't have an account?
Sign In
Advertisement
in: Articles needing citations, Articles including information from the Mythos Influenced Works, Planets,
and 3 more

🐙 Tiamat (aka, Beast II and Titan) is a Lovecraftian-like living planet and the cosmic horror element in the fictional universe of the Hellstar Remina manga.

Tiamat is the Goddess of Chaos, whom randomly designed life. She is the sea of life, circulating the True Ether of Genesis. An entity who enjoys being the mother of all, full of joy and love her children. She is also filled with hatred due to being abandoned by her children who turned on her and destroyed, exiled, or imprisoned the goddess. Millennia later she was awakened from her deep slumber by the collapse of the Human Order Foundation, the Grail's power, and Chaldea's attack. She returned to Earth to exterminate humanity and be reunited with her children.

She is a being who doesn't speak any human language, her voice sounding like a sound which can only be understood by her children. She has various abilities including being able to transform, alter her size, possess others, remaking other organisms into its minions, a barrier which subverts the theory of evolution, and monstrous strength. 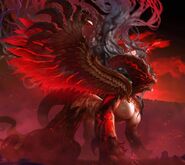