The H.P. Lovecraft Wiki
Register
Don't have an account?
Sign In
Advertisement
in: Articles needing citations, Clean-up, Articles including information from the Mythos Influenced Works,
and 4 more

🐙 The Topographical Man is an eldritch extra-terrestrial entity and cosmic horror element in the fictional universe (Earth-691) of Marvel by Marvel Comics.

Topographical Man is an interstellar humanoid-like entity whose arms span light years and ends with a sun contained within each hand. It's body has an atmosphere and sentient lifeforms from various worlds living on its surface, which is mostly sandy deserts. The entity cannot move and gets its energy from the insatiable Karanada.

The Karanada are entities which consist of a single grain of sand that have been imbued by his power. They are always hungry, feeding off anything it encounters. Growing in size and power until it begans to consume worlds and stars, and then galaxies. They neither by injured or slowed down by either physical force or energy attacks. Only the strength of spirit and determination can defeat it, causing the entity to shrink to its initial size and power. If a Karanada is destroyed or contained, another one forms. Living beings that are consumed by it are transported to the Topographical Man's surface. 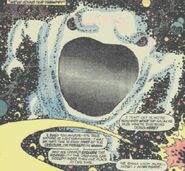 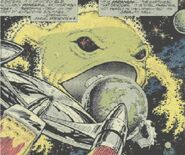