"The Whisperer in Darkness" (publication order)

Tsathoggua, also known as the Sleeper of N'kai, is an entity in the Cthulhu Mythos shared fictional universe. He is the creation of Clark Ashton Smith and is part of his Hyperborean cycle.

Tsathoggua (or Zhothaqquah) is described as an Old One, a godlike being from the pantheon. He was invented in Smith's short story "The Tale of Satampra Zeiros," written in 1929 and published in the November 1931 issue of Weird Tales.[1] His first appearance in print, however, was in H.P. Lovecraft's story "The Whisperer in Darkness", written in 1930 and published in the August 1931 Weird Tales.

The first description of Tsathoggua in the Mythos writings occurs when the protagonists encounter one of the entity's idols:

Tsathoggua is often found asleep. He is incredibly lazy and refuses to leave his chambers unless mortally threatened. If disturbed, he will eat him unless the awakener has a sacrifice to offer; in which case, Tsathoggua will eat the sacrifice instead and then fall back into hibernation. However, there are exceptions. When the wizard Ezdagor sent the Hyperborean Lord Ralibar Vooz as a sacrifice in Smith's "The Seven Geases", Tsathoggua refused him and bound Ralibar Vooz to a geas, sending him to be eaten by another denizen of Mount Voormithadreth (the next five likewise did the same).

Robert M. Price notes that "Lovecraft's Tsathoggua and Smith's differ at practically every point." Lovecraft, dropping Smith's bat and sloth comparisons, refers to the entity in "The Whisperer in Darkness" as the "amorphous, toad-like god-creature mentioned in the Pnakotic Manuscripts and the Necronomicon and the Commoriom myth-cycle preserved by the Atlantean high-priest Klarkash-Ton" (HPL: "The Whisperer in Darkness") --the priest's name a tip of the hat to Tsathoggua's creator.

Later, in "The Horror in the Museum", a story ghost-written by Lovecraft, he writes, "Black Tsathoggua moulded itself from a toad-like gargoyle to a sinuous line with hundreds of rudimentary feet."

It is likely that Tsathoggua can alter his shape, the better to adapt to whatever environment he is in. When he dwelt on Cykranosh (a planet we know today as Saturn), he probably had a much different form, probably looking more like his paternal uncle Hziulquoigmnzhah , whose head dangles underneath his spheroid-like body.

Tsathoggua dwells deep beneath the earth in N'kai. Tsathoggua once dwelt inside Mount Voormithadreth in Hyberborea, but left after the continent iced over.

In The Old One by John Glasby, Tsathoggua is stated to reside in the ruined underwater city of Yuth near the Bahamas, although this is in clear contradiction of the original source material.

Tsathoggua's will is carried out by the formless spawn, polymorphic entities made of black goo. They are extremely resilient and very difficult to dispatch. Formless spawn can take any shape and can attack their targets in nearly every conceivable way. They are surprisingly flexible and plastic, and can quickly flow into a room through the tiniest of cracks. They attack by trampling their targets, biting them, or crushing them with their grasp. Formless spawn often rests in basins in Tsathoggua's temples and keep the sanctuary from being defiled by nonbelievers.

In his story At the Mountains of Madness, H. P. Lovecraft states that "[a] few daring mystics have hinted at a pre-Pleistocene origin for the fragmentary Pnakotic Manuscripts, and have suggested that the devotees of Tsathoggua were as alien to mankind as Tsathoggua itself."

The formless spawn appears as adversaries in the video game Quake.[2]

In 1975, Tsathoggua made a cameo in The Golden Apple, book two of The Illuminatus! Trilogy, by Robert Shea and Robert Anton Wilson, where he was also referred to as Saint Toad.

In 2005, Chaosium published a Cthulhu Mythos anthology edited by Robert M. Price called The Tsathoggua Cycle, which comprised the original Clark Ashton Smith stories featuring Tsathoggua, along with tales by other authors in which the entity has a starring role. The short story collection includes:

Smith literally wed Lovecraft's creations to his own gods, which seem to be molded more like the greek pantheon than the cosmic group of Lovecraft's fiction.[3] Indeed, he assigned outlandish familial relationships to his gods — for example, making the Saturnian being Hziulquoigmnzhah the "uncle" of Tsathoggua[4] — and ascribed this bizarre family tree to the Parchments of Pnom, Hyperborea's leading "genealogist [and] noted prophet".[5]

Kzadool-Ra was a son of Tsathoggua, who destroyed him in a fit of jealousy. 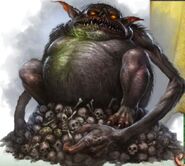 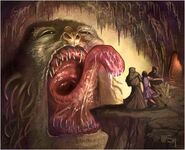 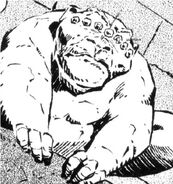 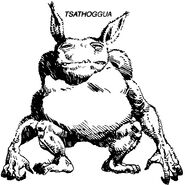 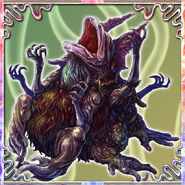 George Olshevsky named the nonconvex snub polyhedra after some other Great Old Ones, with the Great snub icosidodecahedron as "Tsathoggua".