🐙 The Tyranid are a ravenous extra-galactic race and cosmic horror element from the fictional universe of the Warhammer 40,000 tabletop miniature wargame.

The Tyranid are a nomadic extra-galactic super-organism which consists of numerous genetically engineered forms. That were created from the bio-mass harvested from worlds. It's known to humans of the Milky Way galaxy as the "Great Devourer", posing an existential threat to not only the Imperium of Man but also the galaxy at large. The Tyranids seek to drain the galaxy's worlds of every possible resource.

Biologically they have six limbs, carapace plates on the head, both an exoskeleton and an endoskeleton, a series of spiracles at the base of their tails and on their heads, and external skeletal features which are distinct from their internal skulls. Tyranids experience an incredibly rapid rate of evolution due to the DNA they have assimilated from the consumed worlds and the constant re-absorption of Tyranid matter, which results in the creation of new varieties.

It has a "Hive Mind", which is a gestalt psionic entity formed by the collective Tyranid individuals and controls them the Tyranids via psychic manipulation. It fills the same roles of military command and control, linguistic communications, and social hierarchy found in other races. It's delivered via select breeds of Tyranid (known as "Synapse" creatures), whom make all of the Tyranids within their range resistant to the deadliest blows, keeps them under control, and makes them immune to psychological attacks. When a Tyranid its out of range, it either moves within range of a synapse creature or it reverts to its natural instincts and acts as animals.

They are led by the Norn-Queens, titanic eldritch creatures that function as biological factories producing ever more advanced species and units. Colossal abominations teaming with Tyranids, crawling all over them. The Norn-Queens lead the Hive fleets and give orders to the horde via the "Synapse" creatures. They are one of the few sentient creatures among the Tyranid, and are constantly arguing with each other psychically, as to what would be the next best adapted species to produce.

Tyranid Hive Minds also disrupt faster-than-light travel via the Warp (Immaterium) and interstellar telepathic communication via a mechanism known to humans as the "Shadow in the Warp". Resulting in targeted worlds finding themselves cut off from reinforcements and isolated for weeks, months, or years before the Tyranids arrive. Which leads to increasing levels of fear, despair, and terror among the inhabitants and defenders, as the Tyranid fleet gets ever closer.

A vast Tyranid swarm, the size of a galaxy is heading toward the Milky Way galaxy. It has already consumed the Andromeda galaxy, turning it into a lifeless sector of the cosmos. The Imperium of Man and other races of the galaxy have for centuries been desperately fighting against Tyranid Hive fleets which have devastated worlds and sectors. Fleets which are only a tiny fraction of the Tyranid whole, for all intents and purposes forward reconnaissance elements of the greater whole. 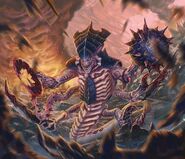 Add a photo to this gallery
Retrieved from "https://lovecraft.fandom.com/wiki/Tyranid?oldid=34694"
Community content is available under CC-BY-SA unless otherwise noted.