The H.P. Lovecraft Wiki
Register
Don't have an account?
Sign In
Advertisement
in: Articles needing citations, Articles including information from the Mythos Influenced Works, Other Supernatural Beings, Characters Originating From Mythos-Inspired Works 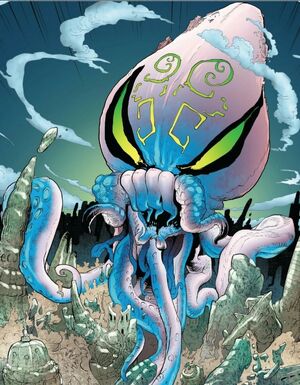 🐙 Uluath is a Lovecraftian cephalopod god in the fictional universe of Marvel by Marvel Comics. It appears to draw its inspiration from Cthulhu, and is served by creatures that closely resemble Deep Ones.

Uluath (aka the Destroyer and the Dread Lord) is an "Undergod". Which has been sleeping in the Pacific Ocean, in the City Below the Seas. Happyology, a cult founded by McTavish, attempted to awaken Uluath via the use of an ultrasonic transmitter. Elsa Bloodstone attempted to stop them, but was unable to prevent its activation. Causing the city to rise to the surface and bringing forth a horde of fishmen. She ended up being captured by the cultists and fishmen. Kid Kaiju and Aegis one of his robot like monsters arrived on the island, attempting to rescue her, and in the process completely awakened Uluath. Whom was defeated and knocked out by Aegis, and went back into slumber.

City Below the Sea