The H.P. Lovecraft Wiki
Register
Don't have an account?
Sign In
Advertisement
in: Articles needing citations, Articles including information from the Mythos Influenced Works, Mythos-Influenced Works,
and 3 more 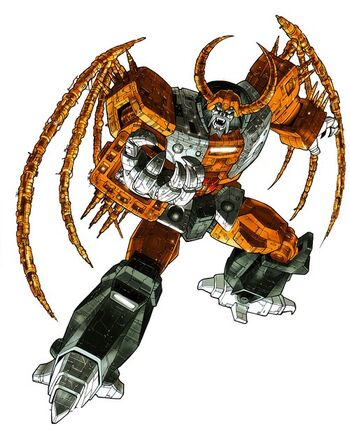 🐙 Unicron is a multiversal eldritch machine entity from the fictional universe of the Transformers comics and cartoons by Hasbro, Marvel Comics, and IDW Comics.

Unicron, the Lord of Chaos (aka, the Planet Eater and the Chaos Bringer), is the eternal foe of Primus, his twin-brother (Cybertron). He has one goal which is to consume the multiverse. His planet-sized form is powered by the energy of the moons, planets, and stars he has consumed. Unicron desires to end all of existence, and therefore find peace in the center of a void. At the star of creation, Unicron was part of The One an extra-dimensional entity. Who created two astral beings to explore the newborn universe, Unicron and Primus, both of whom were multiversal singularities. They represented Chaos and Order, good and evil, both of whom are needed for the multiverse's stability.

Primus came to see Unicron as a corrupt being that posed a threat to the cosmos, and attempted to stop his sibling. He manipulated Unicron into a trap, which ended with both of their essences trapped within metallic planetoids. Over time, Unicron learn to psionically shape his metallic prison into a giant planet, after which Primus did the same turning his prison into Cybertron. Unicron then took it a step further and transformed into a giant robot. Primus took a different route and created 13 shapeshifting robots, the first Transformers. One of them would end up betraying Primus and becoming Unicron's acolyte, The Fallen. The war continued until both Unicron and the Fallen were sucked into a black hole, temporarily ending the threat of Unicron.

Unicron is able to travel to any reality he desires. Integrated into Unicron's systems are eldritch quantum computers that calculate probabilities forwards and backwards in time, forever, thereby giving him a continuously updated map of the multiverse. So far Unicron has consumed 22.56% of known realities. He acts like a plague that's spreading across the multiverse, devouring what it can and retreating from what it cannot consume. Across the multiverse, various versions of Unicron came into existence, though smaller than the prime singularity, all had the same goal. Unicron's insides are full of organic caverns with their own internal defenses. Anyone who is consumed by Unicron are captured and then dissolved within acid pools. Ever since the Shroud brought about by Nexus Prime, travel between realities has been vastly reduced and the various versions of Unicron are now contained within their respective realities.