The Voormis are a fictional race of cave-dwelling humanoids who worship Tsathoggua. They are the primary focus of CIRCLE: "The Scroll of Morloc" [Lin Carter and Clark Ashton Smith] (1976)

They are referred to as the Voormi (plural: Voormis) in The Pnakotic Fragments.[citation needed]

The Voormis considered themselves the chosen minions of Tsathoggua, and his direct descendants.

The Voormis are described as three-toed, umber-colored, fur-covered humanoids[1] though they are carefully differentiated from their traditional enemies (the shaggier-haired but superficially similar Gnophkehs who worshiped the Great Old One Rhan-Tegoth). Both of them are further differentiated from true humans. The Voormis communicate by dog-like howls.

They reside in the continent of Hyperborea, which will be known in the future as Mhu Thulan. The Voormi inhabit cave systems under the four-coned extinct volcano named after them - Mount Voormithadreth, the tallest peak in the Eiglophian mountains. Their ancestors, as described by Carter's narrative, were originally thralls of the Serpent People who escaped after the continent of the latter sank to the sea. They are shamanistic and apparently begun dwelling underground in an effort to imitate their deity, Tsathoggua, under the leadership of the eponymous Voorm.

The Voormis established a thriving culture in the surface Hyperborea before the coming of humans;[2] establishing citadels in the island of Ta-Shon<[2] and adding to the arcane knowledge of the Pnakotic Manuscripts.[3] Their civilization eventually fell into demise.[4] With constant warfare with their archenemies, the Gnophkeh, they grew smaller and smaller in numbers, until the remnants retreated to the highest slopes of the Eiglophian mountains. They were soon hunted for sport by later human settlers.

The eponymous ancestor of the Voormis who founded the Voormis civilization after the fall of the Serpent People. (CIRCLE: "The Scroll of Morloc")

He repopulated Hyperborea after humans deserted the city of Commoriom, building Uzuldaroum in its stead. Athammaus, the last executioner of Commoriom, tried to execute him by beheading for his inhuman crimes. Because of Zhaum's preternatural heritage, such attempts proved unsuccessful and only served to aggravate him. As a descendant of Cxaxukluth, Knygathin Zhaum reproduced by fission and thus created an Azathothian strain among the Hyperborean Voormi. 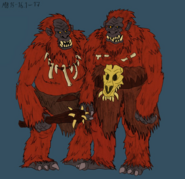 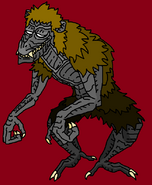 This article is a stub. You can help the The H.P. Lovecraft Wiki by expanding it.
Retrieved from "https://lovecraft.fandom.com/wiki/Voormi?oldid=33613"
Community content is available under CC-BY-SA unless otherwise noted.