The H.P. Lovecraft Wiki
Register
Don't have an account?
Sign In
Advertisement
in: Articles including information from the Expanded Cthulhu Mythos, Earth-Native Species, Species Originating From Expanded Mythos Works,
and 2 more

Werewolves are humans which take a partly lupine humanoid form or a full wolf form. An individual may be cursed, turning into a werewolf at the full moon and perhaps be unaware of the curse. Persons may be able to control the metamorphoses and even glory in the transformation. They propagate the species through the saliva by biting. Werewolves are able to regenerate but can only be killed by silver weapons and fire.

Werewolves can be created by either mystical means or science. A few werewolves were turned into lupine humanoids by gods or demons, the vast majority are tied one way or another to the Elder God Chthon. Whom were either created by use of his magic or cursed by the Darkhold.

Werewolves were created in 18,000 BC by aliens in the Savage Land using a combination of science and Chthon's magic. Within the Darkhold is also a curse to turn humans into werewolves. Beings with regenerative healing and superhuman strength, reflexes, speed, agility, stamina, durability, and senses. Their transformations controlled by the phases of the moon which also influences how feral they become.

Science has been used to create werewolves, the most well known by the supervillain Nightshade. Who created a drug that turns humans into werewolves, in one case turning the population of a whole city (Starkesboro) into werewolves. Being artificially created werewolves they do not possess the weaknesses of the mystical type.

Werewolf (Conan: Adventures in an Age Undreamed Off) 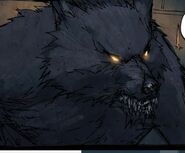