The H.P. Lovecraft Wiki
Register
Don't have an account?
Sign In
Advertisement
in: Articles including information from the Mythos Influenced Works, Article stubs, Mythos-Influenced Works,
and 3 more 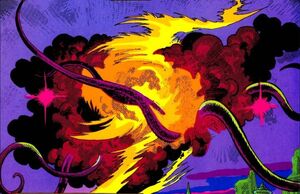 🐙 Xotli (aka, the Demon from Beyond & the Lord of Terror) is a Lovecraftian-like extra-dimensional entity from the fictional universe of Marvel by Marvel Comics. It first appeared in 1968 in Robert E. Howard's Conan of the Isles novel.

Xotli is a Lovecraftian-like demonic god which was worshiped in Antilla during the Hyborian Ge. It threatened all of humanity, and would have killed Conan at the Great Pyramid of Ptahuacan if it wasn't for the intervention of the god Mithra. Xotli did not fully manifest on Earth at that time, all that was visible were great tentacles emerging from a sinister black cloud. 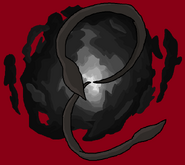 Ryuga Boumera's interpretation of Xotli.
This article is a stub. You can help the The H.P. Lovecraft Wiki by expanding it.
Community content is available under CC-BY-SA unless otherwise noted.
Advertisement