The H.P. Lovecraft Wiki
Register
Don't have an account?
Sign In
Advertisement
in: Articles including information from the Expanded Cthulhu Mythos, Great Old Ones, Characters Originating From Expanded Mythos Works
English

Y'golonac (The Defiler) is a Great Old One. He is the god of perversion and depravity – not just "average" human perversions or depravities, but any that can be conceived of by a sapient being (sane or otherwise). His demeanor is much like that of Nyarlathotep, but he is much more perverse and sadistic. Y'golonac can sometimes be summoned merely by reading his name in the The Revelations of Gla'aki.

Y'golonac is imprisoned behind a wall of bricks in unknown ruins. His true form is uncertain, but when he possesses a human host to manifest, he appears as a grotesquely obese man, lacking a head or neck, with a mouth in the palm of each hand. Unlike other deities, Y'golonac is clearly capable of understanding humans, to the point of being able to conduct a conversation in English through his human host.

Y'golonac seeks humans who read perverse and forbidden literature to become his servants. When Y'golonac is summoned, he offers to grant the summoner the dubious honor of becoming his priest, or simply kills him for food. 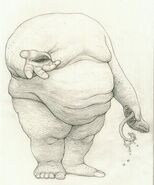 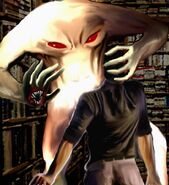 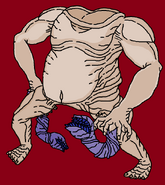