The H.P. Lovecraft Wiki
Register
Don't have an account?
Sign In
Advertisement
in: Articles needing citations, Articles including information from the Mythos Influenced Works, Other Supernatural Beings,
and 2 more 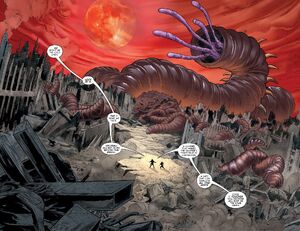 🐙 Yag-Ath-Vermellus is a Lovecraftian-like demonic entity in the fictional universe of Vampirella by Dynamite Entertainment.

Yag-Ath-Vermellus (aka, The Hungry One) is a ravenous god which seethes with hatred that is older than the universe, born into icy realms of ancient horrors. It is a murder god, the embodiment of hatred and incarnation of hunger. Which chews holes to other other realities, extruding little parts of itself into those universes. In search of hope and light, which are its food. These pieces formed keys which have the ability to open a door to a dimension with giant worms. That try to get a foothold, instilling their hunger in the vampires they create. One of its keys encountered humans millions of years ago, creating the first vampire.

Vampires whom are the key can have a stake driven into their heart and a building collapsed on them, and they still live. Those vampire it controlled / infected had fanged mouths in their hands with serpent-like tentacles and some of them have those tentacles coming out of their face (mouth or eye) and/or chest. Vampires that burn with their hunger for blood and are consumed with rage. Its offspring are tentacled balls of flesh with fanged mouths. When Dracula made a pact with it, he gained the ability to walk in sunlight and create the abominations at will, those he bite turning into them within seconds. Which can grow bat wings and fly.

Gallery of Spawn of Yag-Ath-Vermellus